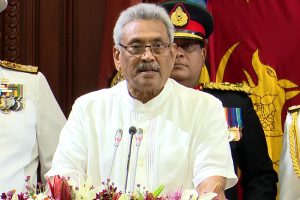 President Gotabaya Rajapaksa has requested global powers including India and China to respect Sri Lanka’s identity as a sovereign nation.

During Rajapaksa’s recent visit to India, Indian Prime Minister Narendra Modi called for the implementation of the 13th amendment to the constitution to carry forward the reconciliation process in the north of Sri Lanka.

However, Rajapaksa during an interview with an Indian media outlet said he will not implement the 13th amendment.

Meanwhile, Rajapaksa last month stated that he will renegotiate the Hambantota Port deal with China. He said giving away a strategically and economically important harbour was not acceptable.

I invite global powers including #India & #China to place your trust us and invest in our future, while respecting our unique identity as a sovereign nation #visioninaction #ActioningTheBlueprint pic.twitter.com/HGDyar4Aoj

January 1, 2021 byNethmi Liyanapathirana No Comments
The inauguration of the national programme to establish 1,000 well-equipped national schools within the country's school system, with the aim of providing quality education to all children in the coun

A win in Medawachchiya for Gota