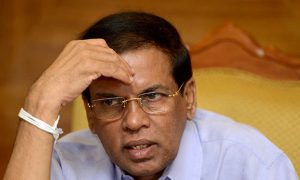 PSC Chairman Deputy Speaker Ananda Kumarasiri told The Sunday Morning that the President had informed the Committee of the scheduled date.

Kumarasiri said the PSC would not be holding its sittings at the usual committee room in the parliamentary complex when the President attends.

“The PSC will hear President Sirisena’s testimony at the Presidential Secretariat,” he said.

With regard to the session being opened to the media, the Chairman said that no decision had yet been taken on this.

“We have to speak about this and other matters with the President and finalise everything before the 20th,” he said.

In addition, he said that the Committee would seek Parliament approval to extend its term.

“We want to extend the term of the Committee by two weeks. We will make this request to Parliament.”

January 22, 2022 byNews Admin No Comments
The Government is exploring the possibility of entering into a Preferential Trade Agreement (PTA) with China instead of a Free Trade Agreement (FTA), with some Cabinet Ministers believing that it woul

October 5, 2021 byRuwani Fonseka No Comments
Former Sports Minister Mahindananda Aluthgamage made a startling revelation just a short while ago in Parliament today (05) when he said he was not satisfied with the investigations pertaining to cric