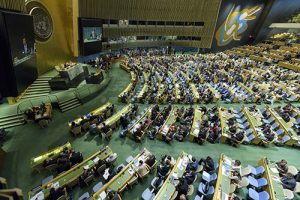 President Maithripala Sirisena made a last-minute withdrawal from the UN General Assembly (UNGA) meeting in New York and was represented by Foreign Secretary Ravinatha Ariyasinghe, The Sunday Morning learnt.

The General Debate of the 74th session of the UNGA began on 24 September and ends tomorrow (Monday).

A source at the Presidential Secretariat told The Sunday Morning that the President’s Office had made all preparations for President Sirisena’s visit but the office was informed at the last minute that he will not be participating.

“The reasons for his withdrawal from the session were not known,” sources said.

However, the source believed that the President’s last minute withdrawal may have been triggered by the current political situation in the country.

“If the President participated for the sessions, he might be in New York right now when the country’s political situation is at a very decisive stage,” the source said.

If the President participated, it would have been his last representation of Sri Lanka at the UNGA prior to ending his term as President.

Nearly 200 leaders converged for five days of speeches and meetings at the UNGA.

Notable absentees however, were President of China Xi Jinping and Russian President Vladimir Putin. Also absent were Benjamin Netanyahu, who is currently fighting to retain his status as Prime Minister of Israel, and President Nicolas Maduro of Venezuela.

This part of the Northern Line is suspended for maintenance work on the railway track,