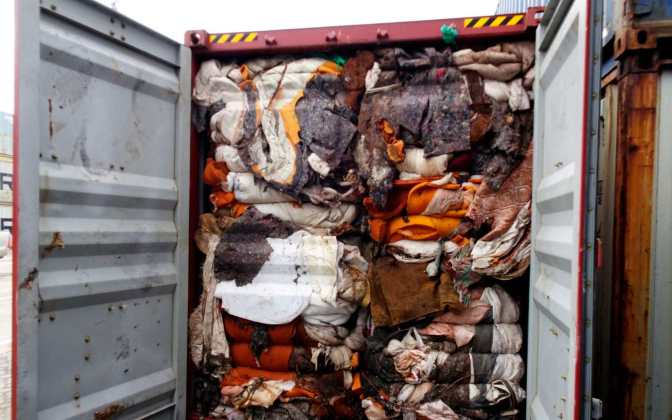 The Central Environmental Authority (CEA) proposed alternative options including securing the services of a foreign consultancy firm with adequate technical knowledge to expedite the process of investigating into the containers of imported garbage from the UK found at the Colombo Port last year.

Speaking to The Sunday Morning, CEA Director General Hemantha Jayasinghe said the authority did not have adequate technical knowledge and facilities to properly investigate the garbage containers.

“Soon after a case was filed, the court wanted to know whether the garbage in the containers were clinical waste or not, and at that time, it was decided that the Government Analyst’s Department would conduct the investigations to test the garbage since the Department has always been involved with court cases,” he said.

“The CEA can conduct tests to check the quality of air, water, noise, and vibration, but it doesn’t have the technology to test garbage,” the CEA DG said.

He further noted that if the Government Analyst’s Department was also unable to properly investigate the issue and submit reports to court, alternative options would be looked into.

“The CEA also proposed to evaluate the technical ability of the Industrial Technology Institute (ITI) to check the containers,” Jayasinghe said.

Last week, the Court of Appeal instructed the Minister of Justice, the Secretary of the Justice Ministry, and the Attorney General (AG) to conduct an investigation into the Government Analyst’s notification that his Department had no facilities to check the containers of imported garbage from overseas and take appropriate measures.

The Court of Appeal bench comprising President Justice Yasantha Kodagoda and Justice Arjuna Obeyesekere, issued the order after hearing a petition filed by the Centre for Environmental Justice seeking a ban on the importation of garbage from abroad.

The Centre for Environmental Justice sought a court order to prevent transporting the waste containers to other internal destinations other than for the purpose of re-export to the UK.

When the petition was called in July 2019, the Court of Appeal had ordered the Government Analyst to conduct an immediate investigation and submit a report on the contents of the containers imported from the UK and stored in the Colombo and Katunayake Free Trade Zones.

In response, the Government Analyst had informed the court that he did not have the necessary facilities to check the garbage.

When The Sunday Morning contacted Secretary to the Ministry of Justice J.J. Ratnasiri, he said the Ministry had not yet received copies of the order made by the Court of Appeal.

“The Ministry was informed that the Department had no facilities to conduct the investigation as there were around 250 containers to test,” he added.

Ratnasiri also highlighted that the tests should be done by the CEA or the Sri Lanka Ports Authority.

March 25, 2021 byNews Admin No Comments
The Court of Appeal is to make an order on 31 March with regard to the issuance of notices to the respondents named in the writ petition filed by incarcerated Samagi Jana Balawegaya Parliamentarian Ra

July 12, 2021 byNews Admin No Comments
Nearly 15 Teachers' and Principals' Trade Unions have decided to withdraw from all online teaching activities from today (12) until further notice, in protest of the arrest and subsequent forced quara