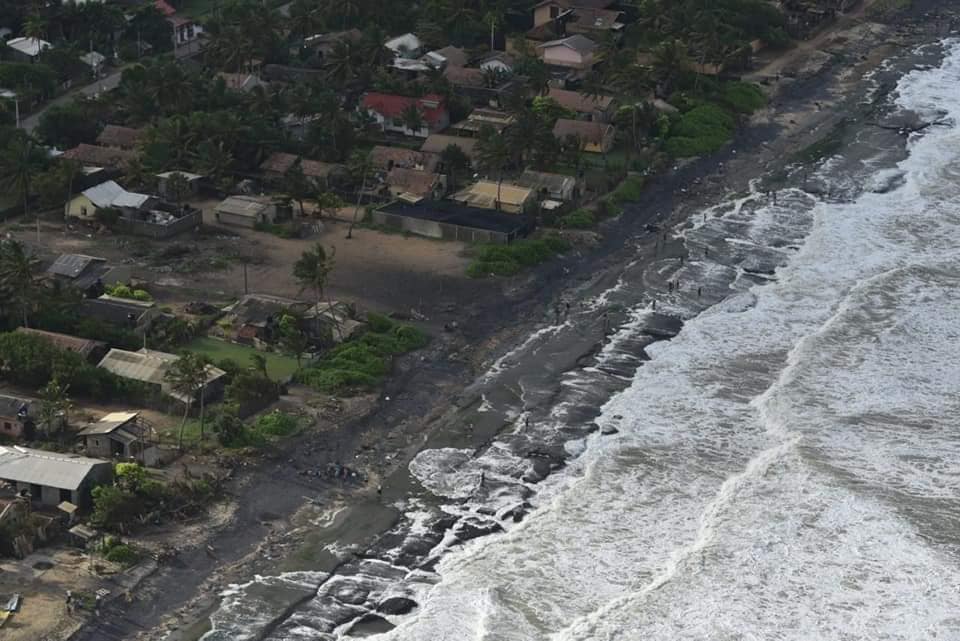 Probing the depths of the damage

The fire aboard the MV X-Press Pearl container ship did not just leave debris, pollution, and dead marine animals in its wake; it also left a number of questions concerning the true nature and extent of the destruction it caused, and Sri Lankans are concerned as to what would be the results of the ongoing investigations. Who are the responsible parties; what is the true extent of the damage caused to the environment; how much money will Sri Lanka receive as compensation; and how long will it take for Sri Lanka to completely restore the damaged environment? These are questions only the ongoing investigations can answer. 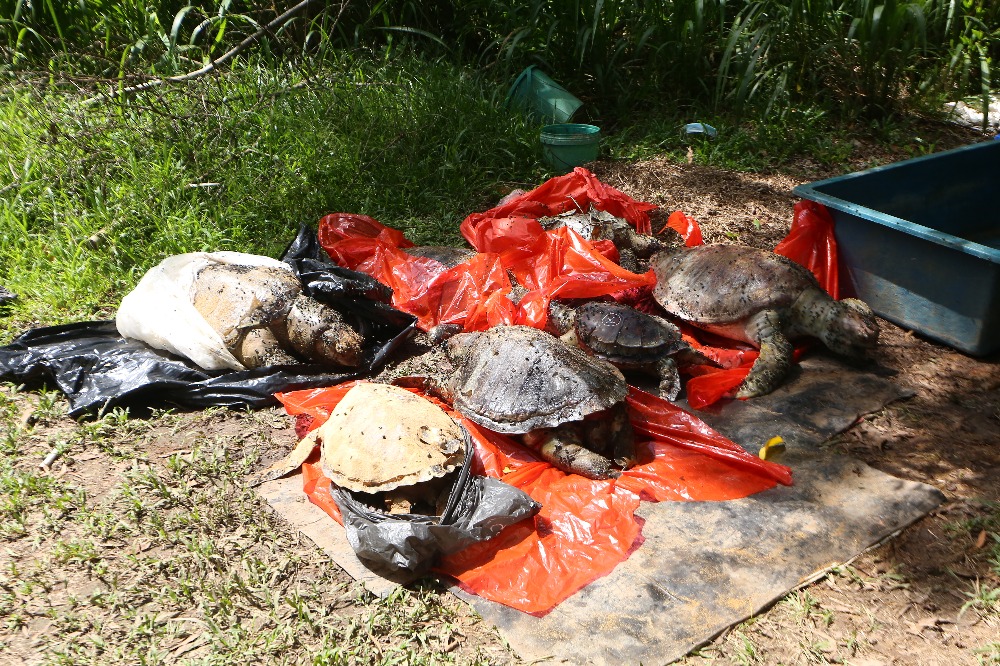 The ongoing environmental assessments are being conducted according to five identified environmental impact domains; namely, air, sea, estuarine areas/lagoons, land, sediments, and food web, and these aspects are being assessed separately. During this process, both visible and invisible aspects of pollution are assessed.

This process, despite being mainly focused on the damage caused to the environment, eventually leads to estimating the monetary value of those damages, and it will be an integral part of the legal action Sri Lanka is to take. Many parties recently stressed the importance of Sri Lanka taking proper measures to obtain adequate compensation, and environmental organisation Centre for Environmental Justice (CEJ) even filed a fundamental rights petition concerning the compensation Sri Lanka should receive.

Speaking at the press briefing, Prof Gunawardena, who is tasked with evaluating the monetary value of the damages caused to the environment, explained how it is conducted.

The form of assessment, called “economic values for natural resource damage assessment” (NRDS), is basically a process of placing the correct value on types of goods and services provided by the ecosystems, which are usually not recognised by the market, according to her.

She added that under the field known as environmental economics, there are several value types, namely provisioning services (food and direct services), regulating services (air quality, climate, water regulation, etc.), cultural services (educational and aesthetic values), and supporting services (soil formation and photosynthesis, etc. necessary for the production of all other ecosystem services), which have use values (direct and indirect use and option value) and non-use values (unrelated to any use).

Elaborating on the damages identified so far, Prof. Gunawardena said that even though a list of the damages can be presented, it is not an exhaustive one, as the damages are still occurring. Among them are damages caused to the environment as well human activities.

Under “human-related impacts due to air pollution”, attention is being paid to sensitive populations under the airshed (affected areas), response data, impact on increased asthmatic conditions, reduced activity days, derived economic values, and human capital. She added that data issued by the National Building Research Organisation (NBRO) on the affected areas would be utilised for this purpose.

In addition, the “impacts of loss of protein sources on humans” would be assessed, taking into consideration the costs of malnutrition and cost to the economy.

Under “damages caused to the ecosystems by chemicals and high temperature”, several factors such as complete loss of habitats, deaths of marine animals, ocean eutrophication, calculation of the area affected, and the number of animals deceased would be considered, and a value would be assigned based on other studies.

Under “long-term impacts”, damages to coral reefs and other habitats (lost sites for fish breeding) and future costs, costs of damages caused by micro plastics and their future impacts on humans and ecosystems, bio-accumulated pollutants and their future costs on humans and ecosystems, long-term impacts of ocean eutrophication (the gradual increase in the concentration of phosphorus, nitrogen, and other plant nutrients in an aging aquatic ecosystem), and restoration costs would be taken into account, and a value would be assigned based on studies about similar matters.

When it comes to “costs of management of solid waste”, there is a need for a separate waste management facility, as well as emissions and leachate (liquid that takes in substances from the material through which it passes, often making the liquid harmful or poisonous) related costs, which depends on the hazardousness of the waste. Also, further clean up costs related to plastic nurdles (small plastic pallets) would be taken into account, she added.

Meanwhile, Prof. Cumaranatunga, while emphasising the importance of reaching conclusions based on facts and fact-based findings, said that her scope of investigations is based on three different phases of the event, namely, during the fire and explosions, after containing the fire (until the time the remains were moved to the current position), and the present and future.

“In order to assess whether the event caused any change/damage to the environment, it is necessary to assess the status of ecosystems before and after the event,” she noted, adding that it can be achieved through several steps such as collection of available information on biodiversity and status of ecosystems before the incident, collection of scientific information based on the location of the ship, and laboratory and statistical analysis of information.

She noted that obtaining samples is also somewhat difficult due to animals consuming animal corpses that can be used as samples, as well as human activities such as collecting or disposing of debris that can be used as samples. She also noted that a large number of aquatic organisms, marine food chains, and geographical details (pertaining to the location of the incident) were analysed.

As far as how the substances released to the ocean affect aquatic organisms are concerned, there is an evolving situation underway, which therefore needs to be observed and analysed continuously for some time. Prof. Cumaranatunga noted that impacts on two ecosystems, namely coral reefs and seagrass beds, are still not visible due to turbidity caused by monsoon current, and that researchers are yet to obtain information in that connection. She however expressed belief that these ecosystems are highly likely to have been affected.

“However, taking into account the damages that have been caused to marine ecosystems, Sri Lanka will have to farm coral reefs and promote turtle hatcheries to increase the turtle population,” she opined. 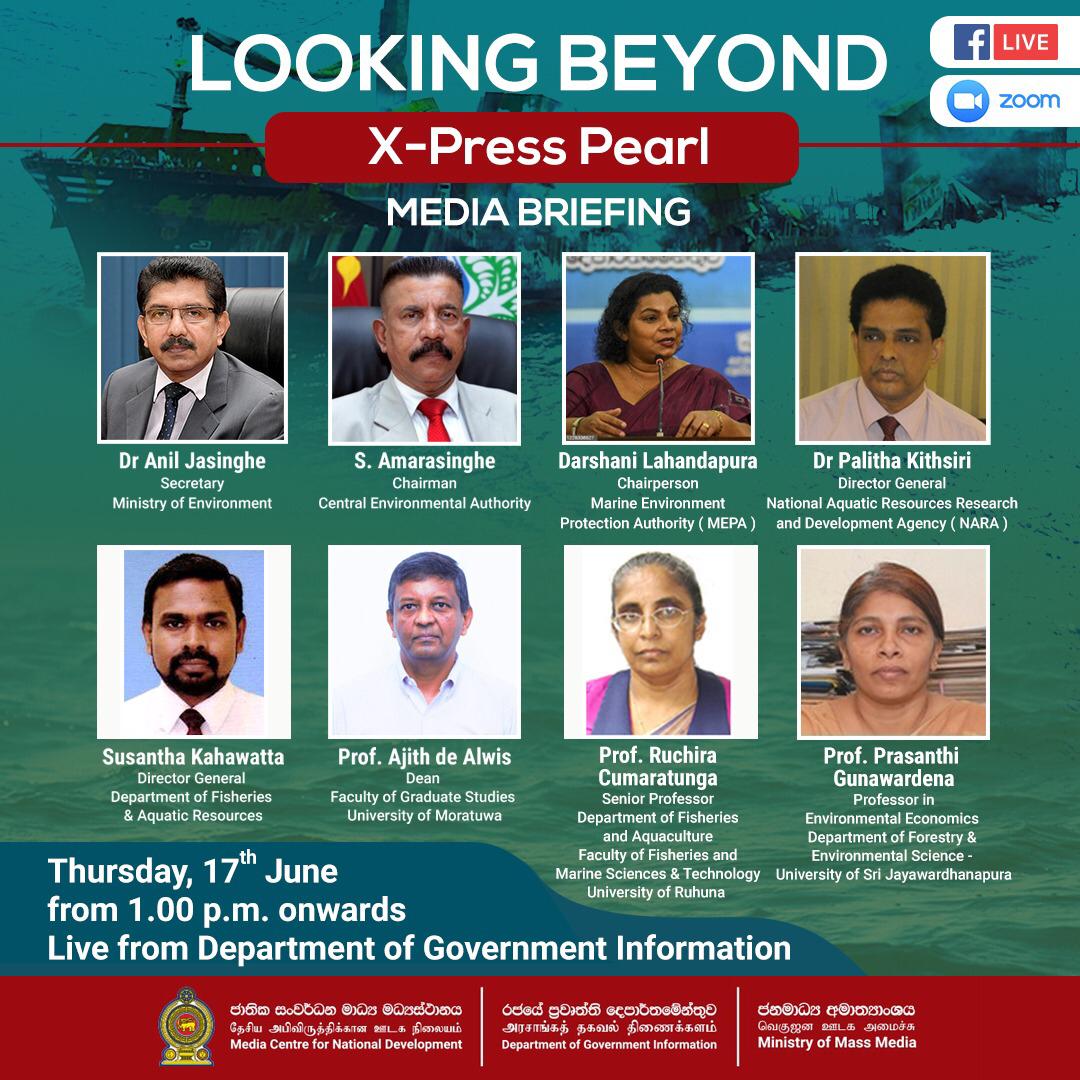 Meanwhile, Dr. Jasinghe said that expert teams are attempting to find answers to several questions, mainly what steps need to be taken to restore the damaged environment and the collapsing economy of those making a living out of sea-related industries.

“One of the components of disaster management is providing the public with information. People may have questions, some of which may be depressing – for example, why turtles wash ashore and whether the people should continue to consume fish. To answer these questions, we have to raise awareness among the public. Disaster management activities have not stopped. They will continue long-term.

“It is important to remove the containers remaining aboard the ship, as they may release more substances to the sea. In the long run, not only the authorities, the public too can be involved in the process of cleaning the debris, especially debris that washes ashore. Countries such as Norway and Hong Kong have similar experiences, and Sri Lanka can study their experiences too, to manage its own situation,” he added.

According to Lahandapura, even though speculation is rife that the ship’s incident is likely to cause, or has already caused, an oil leakage, no evidence has been found to suggest such an impact.

She explained: “When it comes to the possibility of an oil leakage, we have paid attention mainly to bunk oil (oil used as fuel) that the ship was carrying. We have received information that there was around 300 metric tonnes of oil. Based on the nature and duration of the fire, as well as the temperature and position of the oil tanks, an organisation named International Tanker Owners’ Pollution Federation (ITOPF) and the chief of the ship’s salvage company have informed us in writing that they have reached the primary conclusion that the likeliness of any oil in the oil tanks is very low.

Also, MEPA regularly collected water samples from the area and also observed the area in order to ascertain whether bunker oil had been released; however, there was no oil in the samples, nor did we see any signs in the area to suggest any oil leakage.

“It is difficult to take wreckage management steps during the prevailing monsoon season, and after the monsoon, more concrete steps would be taken. The owner of the vessel has appointed a caretaker company to monitor the vessel, pollution aspects of the incident, and the entire area, until the owner appoints a company to remove the wreckage.”

Elaborating on the CEA’s role in this process, Amarasinghe said that the CEA had issued a set of guidelines, according to which the activities pertaining to assessing the damages caused by the incident were carried out.

Accordingly, a decision was taken to immediately collect and remove the debris that washed ashore, and this has already been commenced targeting seven districts, from Matara to Mannar. Over 1,000 personnel, including the public from the respective areas, participate in these activities on a daily basis.

Speaking of the CEA’s activities, he said that the CEA has stored in a very organised and safe manner all the debris that was collected until it ascertains whether that is waste (from the vessel). According to him, the waste that has been collected and stored approximately weighs over 1,000 metric tonnes (stored in 42 containers), and in addition, 10 containers worth of waste has been collected and kept on the beaches (to be transported).

Those who spoke at the press briefing refused to reveal certain information, such as the number of animals that have died and the exact reasons for their deaths, claiming that certain investigations have not been completed yet, and that some information may be required for legation action in the future. They however claimed that once investigations are completed and/or legal action initiated, the reports pertaining to the ongoing investigations would be made public.

There are countless questions yet to be answered, and this discussion was held at a time when discourse about the environmental damage caused by the ship has also begun among the general public.

However, what the general public can do is very limited, and they expect that the authorities would take wise decisions not only to address the damages caused by MV X-Press Pearl, but to also strengthen the country’s maritime and environmental laws to prevent the recurrence of such a catastrophe.

August 6, 2021 byNews Admin No Comments
A protest is scheduled to be held in Anuradhapura today (6) with the participation of nearly 10,000 teachers and principals to protest against what the protestors claim is the Government's failure to

May 15, 2019 byRandev No Comments
It was agreed that China will assist Sri Lanka to strengthen national security in talks held between President Maithripala Sirisena and Chinese President Xi Jinping yesterday (14).