Proposal to include Criminal Law in school curriculum 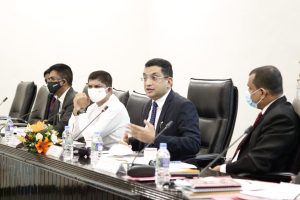 A proposal has been made to include Criminal Law as a subject in school curriculum and to draft separate laws with regard to children in line with reforms of the criminal justice system, the Justice Ministry said today.

The proposals have been made at the Ministerial Consultative Committee on Judicial Affairs which met in Parliament this morning.

At the meeting, it has been discussed to take measures to prevent drug abusers from being imprisoned repeatedly for the same offence.

Rehabilitation of drug addicts and encouraging them to engage in productive activities without labelling them as criminals was also discussed.

May 10, 2022 byAazam Ameen No Comments
A bus carrying a group of prisoners was attacked by a mob last evening (May 09), says the Commissioner-General of Prisons.

January 2, 2019 byEaswaran No Comments
Director of the Anti-Corruption Force Namal Kumara is being investigated for allegedly submitting forged certificates to join the Sri Lanka Army and Air Force.