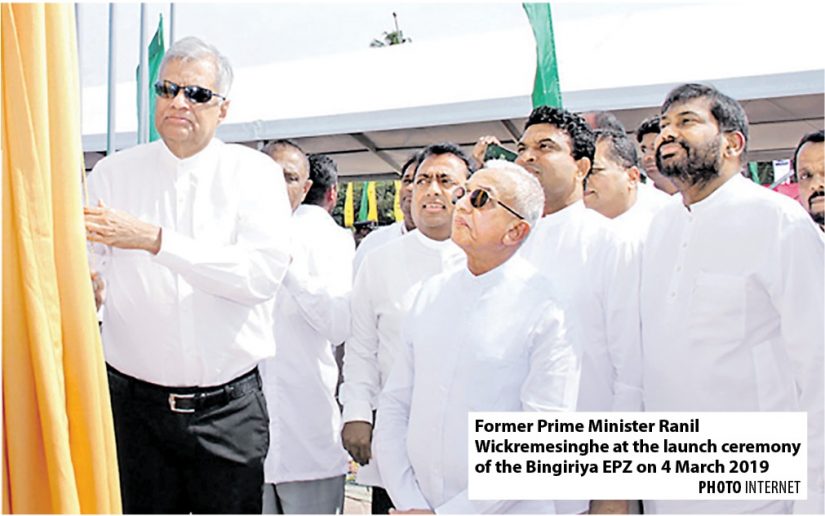 The construction work of the Bingiriya Export Processing Zone (EPZ), which commenced on 4 March 2019 after a 15-year lapse and after the foundation stone was laid by then Prime Minister Ranil Wickremesinghe, is still at a standstill. Said to be the largest EPZ of the country, the project is to be rolled out in three phases, thereby creating thousands of job opportunities.

According to the Board of Investment of Sri Lanka (BOI), a land extent of 164 acres is earmarked to be developed under the first phase of the project, which would facilitate 25 enterprises by opening up 10,000 direct and 3,000 indirect employment opportunities.

The second phase would add another 282 acres of land, thus increasing the number of enterprises up to 70 and providing a total of 25,000 direct and 10,000 indirect employment opportunities.

With the addition of the third and final phase of the project, the total land extent of the Bingiriya EPZ would sit at 1,200 acres, and provide a total of 75,000 direct and indirect employment opportunities.

By September 2019, the BOI stated that six companies had expressed their interest in investing in the Bingiriya EPZ project and the estimated total value of the investments was $ 63.69 million.

Concerns were raised when reports emerged noting that about 2,000 coconut trees had been felled to clear the land for construction purposes and that following the presidential election last year, the construction work had come to a halt. As a result, the question was raised as to whether this was yet another failed development project initiated by the previous Government.

Minister of Industrial Export, Investment Promotion, and Tourism and Aviation Prasanna Ranatunga, speaking to The Sunday Morning, stated that the present Government will continue with the development work at the Bingiriya EPZ.

“We have no objection in continuing the project work at the Bingiriya EPZ, and we will take necessary measures to expedite the infrastructure development at the industrial zone, which will also improve the chances of securing more investors for it. After all, it is viewed as a project that will benefit the citizens of the country and improve the economy as well,” he said.

The Sunday Morning contacted BOI Executive Director – Engineering Approvals and Special Projects H.M. Jayasundara to inquire about the status of the Bingiriya EPZ.

“There was a slight delay in construction during the election. However, we have recommenced work at the site. We are currently constructing the roads leading to the industrial zone in co-ordination with the Road Development Authority (RDA). A 2 MW electricity connection has already been obtained, while necessary payments are made to the National Water Supply and Drainage Board (NWSDB) to provide water and drainage connections,” he noted.

Out of the six companies that had expressed their interest to invest in the project, the BOI has signed agreements with four companies from the fields of pharmaceutical manufacturing, animal feed manufacturing, fruit processing, and PE polythene and water pipe manufacturing, Jayasundara stated.

When questioned about the coconut trees that were felled for development purposes, Jayasundara responded stating that all the coconut trees were well over 60 years old and were not bearing fruit anymore, adding that therefore they were not making any profit for the people in the area.

“This land area was previously under the National Livestock Development Board (NLDB) and for a year, they were only earning about Rs. 19 million. Given that the coconut trees were not bearing much fruit, the NLDB too was not able to turn a profit after the expenses for maintenance and labour were deducted. The land was selected to establish the EPZ following several discussions with the NLDB,” Jayasundara elaborated.

With the coconut plantation not earning a considerable profit, the NLDB had then re-purposed the land to manage livestock, Jayasundara claimed. Furthermore, noting that once the land was earmarked for the establishment of the EPZ, he said the NLDB had relocated the livestock to other locations.

“Given the state of coconut cultivation, we believe the previous Government took a wise decision to develop it into an industrial zone. It would have been a crime to abandon such an extent of land. When the land was used for coconut cultivation and livestock management, it would have provided employment opportunities to about 20-25 people, whereas once the industries commence (at the EPZ), thousands of people will be able to secure jobs, with one industry providing jobs for at least 300 people,” Jayasundara opined.

Then we inquired from Jayasundara whether the BOI could provide a date of completion for the Bingiriya EPZ, to which he responded: “For an industrial zone to fully develop and for enterprises to establish their business, it will take a minimum of eight to 10 years. Even the three phases that we have scheduled will be completed according to the number of investors fulfilling the requirements to set up their businesses. Based on the increasing investors, the infrastructure too will expand.”

At the moment, the BOI is working on acquiring land on either side of the main road to lay the approach roads to the industrial zone.

According to Jayasundara, developing the road network from the industrial zone would take another year, and he assured the roads that are built at present would be sufficient for the incoming investors to commence their construction work.

We have no objection in continuing the project work at the Bingiriya EPZ, and we will take the necessary measures to expedite the infrastructure development at the industrial zone, which will also improve the chances of securing more investors for it.

Sunny Side Up: RW promotes BRI

October 25, 2021 byNews Admin No Comments
Cite minimising of fatalities and injuries among occupants in front and rear seats