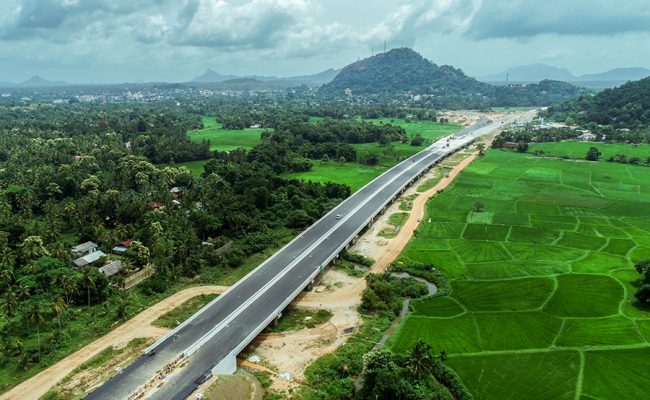 Several major highway development projects which have experienced long delays during the previous United National Front (UNF)-led Government are yet to see the light of the day despite assurances by the present administration.

As of now, the Government has failed to secure foreign investments for major highway projects such as the construction of the Ruwanpura Expressway, the Central Expressway, and the Elevated Highway.

Similarly, the RDA is also looking at the possibilities at present to begin the construction work of Section IV of the CEP with the support of local contractors.

Likewise, there is no final decision on the proposed Elevated Highway Project from New Kelani Bridge to Athurugiriya, which saw vehement opposition from the residents in Battaramulla, as the proposed highway was to be constructed over the remaining areas of Colombo’s wetlands in Thalangama and Averihena.

As claimed by some experts, the reason for the delay in attracting foreign investments is mainly due to the government policy – the debt-free build-operate-transfer (BOT) method adopted recently.

According to them, when it comes to BOT projects, the investor expects considerable revenue and therefore, the applicability of the BOT method for CEP was questionable, as the number of vehicles that would use the highway once completed would not be enough for the investor to cover expenses.

It is learnt that the Government has suggested several other investments within the project, such as housing complexes to make the BOT viable.

However, experts stressed that they doubt good investors would invest in such a huge project without any contribution from the Government.

The BOT method was suggested by Secretary to President Gotabaya Rajapaksa P.B. Jayasundara when he issued fresh instructions to the Ministry of Highways and the RDA to call for fresh proposals for the Elevated Highway Project from New Kelani Bridge to Athurugiriya and also to accept bids for Sections III and IV of CEP.

Prior to calling for new proposals, the Ministry of Highways had obtained cabinet approvals to receive technical proposals for the Elevated Highway Project and discussions were ongoing with the China Harbour Engineering Company (CHEC).

Furthermore, a proposal received for the construction of CEP’s Section III from China and Section IV from the UK was about to receive cabinet approval.

In his letter, Dr. Jayasundara stated that the Government will not encourage debt-funded projects or annuity (a series of payments made at equal intervals) payments to meet revenue shortfalls or guaranteed traffic, as these options are not affordable. It is further stated that several parties have submitted letters of intent or interest to the Board of Investment of Sri Lanka (BOI) for the two initiatives on a BOT basis. Most of them were of an unsolicited nature.

Last year, the Cabinet officially removed the Chinese contractor from Section I of the REP, which extends from Kahathuduwa to Ingiriya, and decided to go ahead with local funding.

Accordingly, the construction work of Section I of the REP was recently awarded to a local contractor, Maga Engineering (Pvt.) Ltd., even though initially it was to be given to four different companies.

As said by RDA Chairman Chaminda Athaluwage, the relevant agreements have already been signed with the local contractor and the funds have been allocated by state banks to begin the construction of Section I of the REP.

However, when asked about the other sections, he told The Sunday Morning that no decision has been made yet regarding the construction of other sections of the REP.

At present, Sections I, II, and III of CEP are under construction. Section I is being constructed with Chinese funds while Section II is being carried out by local construction companies. The construction work of Section III was begun by the RDA with local funds until a suitable contractor was finalised.

The RDA was to finalise the awarding of the construction contract for the long-delayed Sections III and IV of the CEP, when Dr. Jayasundara instructed them otherwise.

The project, which at present is running behind schedule, has already caused billions of losses to the Treasury due to the delay as well as the inability of attracting proper foreign investors for Sections III and IV.

The construction work of Section II, extending from Meerigama to Kurunegala (39.7 km), is currently being carried out by local construction companies after a long delay due to financial difficulties. It was to be completed in March.

In the meantime, the construction work of Section I, extending from Kadawatha to Mirigama (37.09 km), began last year with Chinese funds and Section III, extending from Pothuhera to Galagedara (32.5 km), also began its construction with Treasury funds until a proper contractor is finalised by the Government. Yet, there is no clue about Section IV that extends from Kurunegala to Dambulla (60.3 km).

Section I of CEP was awarded in 2015, but funding was finalised only in August 2020, and its completion may take another two-and-a-half years. Section II was constructed by local contractors with funds from local banks. It was due to be completed in November 2020. The current indications are May 2021, but funding would remain an issue. The construction of Section III is delayed by almost four years.

However, he noted that a UK investor has been finalised for Section IV of the CEP and it would be submitted to Cabinet for final confirmation.

The development of the four-lane, 17.3-km-long Elevated Highway, stretching from the New Kelani Bridge (Orugodawatta) to Athurugiriya, was proposed in 2015 to improve the road network in order to deal with the heavy influx of vehicles into Colombo city limits. Phase I of the project (6.9 km) has been planned from Orugodawatta to Rajagiriya while Phase II (10.4 km) will extend from Rajagiriya to Athurugiriya.

Nevertheless, Phase II of the project is currently at a standstill due to the opposition that came from the residents in Thalangama and Averihena.

As they claimed, the proposed stretch, if built, will run through the Thalangama Environmental Protection Area, including the Averihena Lake, which was declared so under the National Environment Act No. 47 of 1980 (as amended) by the Central Environmental Authority (CEA) in 2017, through the Gazette Notification No. 1487/10.

Yet, according to the RDA, 45% of the land acquisition of the first phase of the project has been completed. The Environmental Impact Assessment (EIA) has already been completed. Furthermore, the feasibility study of Phase II has also been completed.

Meanwhile, a writ petition has been filed in the Court of Appeal by the Centre for Environmental Justice (CEJ), seeking an order preventing the construction of the proposed Elevated Highway over the Thalangama Environmental Protection Area.

In their petition, the petitioners have stated that recognising the uniqueness and the importance of this area, owing to its ecological, hydrological, and historical importance, and after carrying out detailed studies and research by the CEA, the Thalangama Tank and its environs were declared as an Environmental Protection Area (EPA) under the National Environmental Act.

When queried about the Elevated Highway, Athaluwage noted that the issue was with Phase II of the project and that there was no barrier to begin the construction of Phase I, from New Kelani Bridge to Rajagiriya.

“We have already completed the EIA and other necessary reports for Phase I, and now we have to begin the relocation process which we already have planned with the Urban Development Authority (UDA),” he said, adding that once everything’s finalised, the construction of the highway would commence within this year.

Commenting on the situation of Phase II, Athaluwage noted that the issue is currently handled by the CEA and the UDA, adding that once they give the clearance, the RDA would go ahead with the project.

However, when contacted, CEA Chairman Hemantha Jayasinghe said there was no final decision on the project as yet and since a court case has been filed, they would wait till the conclusion of the case.

January 31, 2022 byNews Admin No Comments
Strategists and diplomats lay out areas of mutual co-operation and concern, and potential remedies

A judicial analysis of the Executive Presidency

June 27, 2022 byAazam Ameen No Comments
The concept of the Executive Presidency, especially the powers afforded to an Executive President, has been one of the most controversial topics in Sri Lanka’s political arena, and comes up often duri