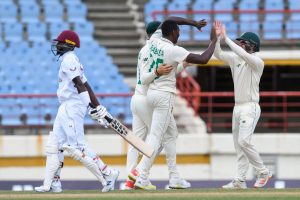 Result: West Indies win by an innings and 63 runs

Next Match: Friday (18) at same venue

Kagiso Rabada’s first five-wicket haul in three years helped South Africa to a convincing innings and 63-run win over the West Indies in their first Test that ended before third day’s lunch break on Saturday (12) at the Daren Sammy National Cricket Stadium in St. Lucia. The visitors took a 1-0 lead in the two-match series.

It was a welcome return to form in Test cricket for the South Africans, who registered their first victory away from home in the format since 2017 to climb to sixth position on the International Cricket Council (ICC) World Test Championship standings.

Fittingly, it was a result that saw key players end their own lean spells as well, noted icc-cricket. In the West Indies’ first innings of 97, Lungi Ngidi claimed his first five-wicket haul since taking six wickets on debut against India in 2018.

In South Africa’s first innings total of 322, the eventual Player of the Match Quinton de Kock scored an unbeaten 141, notching his first Test ton since 2019.

And in the match’s final chapter, where the West Indies were knocked over for 162, Rabada (5/34) collected his first Test five-for since March 2018.

“You measure the highest accolades in cricket by scoring hundreds and taking five-fors and ten-fors,” Rabada said. “It’s something you always strive to do. Unfortunately, it hasn’t happened for me in recent years but I’m glad that’s happened today.

“The only thing you can judge yourself on is being consistent in your preparation. It’s like scoring a hundred. Who wouldn’t be happy with scoring a hundred? I am really glad with the performance I put in.”

The pace spearhead had put the wheels in motion for an innings victory during the final session on day two, accounting for both West Indies’ openers before Anrich Nortje (3/46) chimed in to leave the hosts four down by stumps.

The West Indies’ hopes of an easier day were put to rest early as Jermaine Blackwood was tormented by Lungi Ngidi (0/31) before perishing to Rabada.

Ngidi had celebrated the dismissal of Blackwood in the fourth over of the day only for the batsman to wisely call for decision review (DRS), which confirmed a catch down the leg-side had come off his thigh pad rather than bat.

Four balls later, Blackwood was given out again against Ngidi, and again had it overturned on DRS – the delivery predicted to miss leg-stump.

Just eight balls after that, the South Africans got their man as Rabada had him caught at short cover, ending a 46-run stand.

Finger-spinner Keshav Maharaj (2/23) then hastened the collapse by bowling Jason Holder (4) and Roston Chase (62) to leave the West Indies limping at 140/7. Chase’s patient 62 off 156 was the lone score above 20 by a batter from the hosts for the match.

Rahkeem Cornwall was unable to turn the tide from there, falling for a duck to Rabada in the next over, popping one to mid-off attempting the extravagant.

Rabada went on to wrap up his five-for when he bowled Joshua Da Silva for nine, ending his stubborn 51 ball resistance before Nortje ended the match by dismissing debutant Jayden Seales (3).

A call for final decision on Tokyo 2020 spectators

May 18, 2021 byRevatha No Comments
Last call may be made before IOC boss Bach’s visit in Tokyo