Protest in Puttlam baton-charged by police 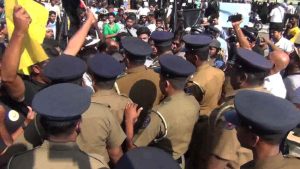 Riot police have baton-charged a group of protestors in Aruwakkalu, Puttlam who were campaigning against the proposed garbage dump site in that same area today (22).

This incident had occurred during a visit made by President Maithripala Sirisena to Puttalam.

The protestors had demanded an opportunity to meet with the President where they would have discussions and come to an agreement about the location of the landfill.

Police to obtain experts report on container of coconut oil

March 24, 2020 byTSM Web Desk No Comments
Addressing the nation for the second time in less than a week, Prime Minister Narendra Modi called for a nationwide lockdown starting midnight to contain the novel coronavirus .