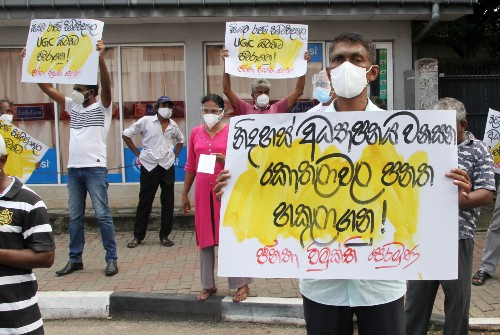 A series of protest demonstrations took place throughout Colombo yesterday (8) in opposition over the General Sir John Kotelawala National Defence University (KNDU) Bill which was tabled in Parliament on the same day, and led to over 31 arrests being made just yesterday.

“The public cannot even express their opposition to the Bill. On Wednesday (7), they had arrested former Janatha Vimukthi Peramuna (JVP) Provincial Councillor Mahinda Jayasinghe, along with a few others. Yesterday, they arrested the Ceylon Teachers’ Union (CTU) General Secretary Joseph Stalin, along with a few others. In an environment like this, in oppressive times like this, when the education sector has so many problems and also at a time when people cannot freely express their opinions, why is the Government in such a rush to bring this Bill?” questioned the National People’s Power (NPP) Parliamentarian Dr. Harini Amarasuriya in Parliament yesterday, following the tabling of the Bill.

Responding to the allegations that the Police are oppressing protestors, the Public Security Minister Dr. Sarath Weerasekera said that it was done in accordance with the quarantine regulations released by the Health Ministry.

However, Dr. Amarasuriya said that “even a child” can understand that quarantine regulations are being used to fulfill political motives.

According to the Frontline Socialist Party (FSP), at a protest held with the participation of the FSP, the Inter University Students Federation (IUSF), the Federation of University Teachers’ Associations (FUTA), other trade unions and students unions, the parents of students, and lecturers, over 31 arrests were made, including that of Stalin.

“Right now, they are seriously exploiting the law. The KNDU Bill would completely change the current higher education laws as it allows for the sale of degrees and for branches of the KNDU to be opened, including schools. This Bill also militarises higher education,” said FSP Education Secretary Pubudu Jayagoda yesterday.

The FUTA also condemned the arbitrary and brutal Police action taken against the peaceful protest convened by the IUSF.

“We see this unprovoked and brutal attack on IUSF students and many other trade union leaders from the education sector, present at yesterday’s protest, as a clear indication that the Government has taken a decision at the highest levels to stifle all dissent in the country. The Police on its own, will not act in this way unless a political green light has been given to use excessive force. This is the hallmark of a failing regime that has lost public trust and is desperately attempting to stay in control by any means possible,” said the FUTA.

Commenting on the Bill in Parliament, Samagi Jana Balawegaya (SJB) Parliamentarian Eran Wickramaratne said that although the SJB is not opposed to defence universities, it is opposed to the Bill in its current form and hopes to bring in amendments so that the University Grants Commission (UGC) could regulate the KNDU.

“Sri Lanka has faced a lack of quality higher education for a long time and I am happy to see that the Sri Lanka Podujana Peramuna (SLPP) is seeking to liberalise this space. However, the military university does not solve the lack of spaces in higher education. This is one of our biggest issues. We want to increase the quality of education but do not want to limit the intellectual freedom of students, or hinder their personal development for which an environment of freedom is needed,” said Wickramaratne.

Meanwhile, the Education Minister Prof. G.L. Peiris assured the House yesterday that the UGC would have regulatory power over the KNDU, according to the Bill.

Countering these claims, Dr. Amarasuriya questioned Prof. Pieris as to how he makes such statements, when the Bill states that it is the KNDU’s Board of Governors that would be overseeing intakes, syllabuses, and quality assurance.

“Bringing a military culture into education is a dangerous thing. In the military culture, one cannot question anything. But in higher education, one must be able to question everything, even if it offends the top brass. According to this Bill, there is no permission for a student union at the KNDU. How is that a university then?” queried Dr. Amarasuriya.

She also tabled a petition signed by 30 trade unions against the Bill.

Train services from WP to other areas suspended

November 11, 2020 byLahiru Pothmulla No Comments
Operation of train services from the Western Province to other areas would be suspended from tonight until Sunday, the Railways Department said.