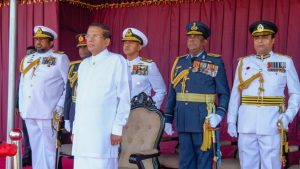 The parliamentary select committee (PSC) appointed to probe the Easter Sunday terror attacks has summoned top defence officials on 29 May (Wednesday) to be questioned over incidents related to the tragedy.

Former Inspector General of Police N.K. Illangkoon was recently appointed as an Advisor to the Ministry of Defence.

He is also a member of a committee appointed by the President to look into some of the incidents related to the attacks.

Fernando and Jayasundara had allegedly been aware of intelligence reports warning of an attack a few days before the bombings took place, but had not shared the information with the relevant authorities.

Sources said that following the meeting on Wednesday, the PSC will meet again on 4 June.

The committee has also sought representations from the public, through newspaper advertisements published yesterday.

The committee is to submit a report either within three months from its inaugural meeting or before the completion of the three months on a date set by Parliament.

May 6, 2020 byTSM Web Desk No Comments
With the increase of rains, Sri Lanka will see a spike in the number of leptospirosis (rat fever) cases as well, the Epidemiology Unit of the Ministry of Health and Indigenous Medical Services reveale