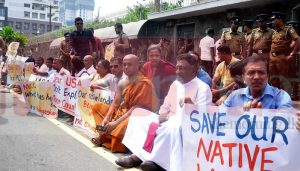 A public protest was organised against the signing of the Millennium Challenge Corporation(MCC) agreement this morning.

The protest took place in front of the US Embassy in Colombo.

However, the Thera called off his strike after written assurance from the Premier, Sajith Premadasa and Gotabaya Rajapakse that the deal will not be signed without consultation.