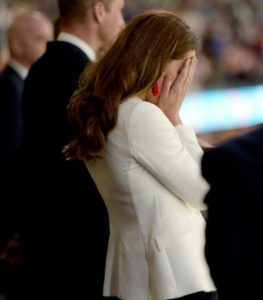 Around 60,000 fans at Wembley witnessed the Three Lions’ Euro final’s defeat on Sunday (12) at the hands of Italy in a penalty shootout. Millions had watched the match in pubs, fan zones, and homes across the country.

The Duke and Duchess of Cambridge too were at Wembley with Prince George. Here is Catherine, a likely future queen consort, covering her face during the penalty shootout.

London’s Metropolitan Police said 49 arrests had been made amid pre-match unrest at the stadium. Amid post-match pandemonium, the royal couple had written on Twitter: “Heartbreaking. Congratulations Azzurri (Italy) on a great victory.”

Star India may have to suffer a huge hit