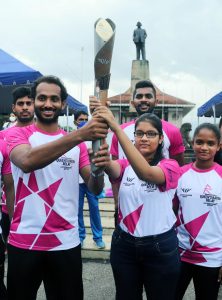 Yesterday, a special reception was held at the UK High Commission in Colombo with the participation of the National Olympic Committee’s newly-elected President Suresh Subramaniam.

The 16th official Queen’s Baton Relay is an epic journey across the Commonwealth, with the Queen’s Baton visiting all 72 commonwealth nations and territories reaching Europe, Africa, Asia, Oceania, the Caribbean, and the Americas.

The global journey of the Baton will conclude at the Birmingham 2022 Opening Ceremony where the final Baton-bearer will return the Baton to Her Majesty the Queen Elizabeth II. The 22nd Commonwealth Games are to be held from 28 July to 8 August in Birmingham, England.

May 4, 2021 byRevatha No Comments
Denies news circulated in social media