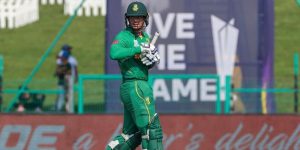 Quinton de Kock refused to take the knee on Tuesday (26)

Have to respect his decision: Bavuma

After the match, skipper Temba Bavuma said he respected De Kock’s decision. “Quinton is an adult and you have to respect his decision,” he said. “When the news hit us, it did kind of take us back as a team. A guy like Quinnie, he obviously plays an integral role within the team, not just with the bat but as a senior player. But with that, (Heinrich) Klaasen coming in there was an opportunity for him, it was another game of cricket that we had to play for our country and we had to live up to that.”

Quinton de Kock refused to take the knee before the match against West Indies at the World Cup on Tuesday (26). While there is no mandate by the ICC, a few teams, led by the West Indies, have decided to take the knee or express other on-field gestures to show their solidarity to the Black Lives Matter (BLM) movement. It’s not yet known if De Kock will play any part in the remainder of the tournament.

In the Proteas’ first match against Australia, players were free to express their solidarity in three different ways (taking the knee, standing to attention or raising a fist). After that match, it was felt that all of them had to take a united stand — ‘taking the knee’ — so CSA sent out a directive to that effect. De Kock, the only South African international cricketer during the last year to not adopt an expression, conveyed his decision to the board that he would rather sit out the match when it put to the players that all of them, including the support staff, would have to take the knee before the match against West Indies. So he made himself ‘unavailable’ for selection.

Even as the West Indies innings was progressing, De Kock’s issue snowballed into a crisis with CSA releasing a statement. “Cricket South Africa has noted the personal decision by South African wicket-keeper Quinton de Kock not to ‘take the knee’ ahead of Tuesday’s game against the West Indies. “All players had been required, in line with a directive of the CSA Board on Monday (25) evening, to ‘take the knee’ in a united and consistent stance against racism.

This is also the global gesture against racism that has been adopted by sportspeople across sporting codes because they recognise the power of sport to bring people together. “After considering all relevant issues, including the freedom of choice of players, the Board had made it clear it was imperative for the team to be seen taking a stand against racism, especially given South Africa’s history.

The Board’s view was that while diversity can and should find expression in many facets of daily lives, this did not apply when it came to taking a stand against racism “The Board will await a further report from team management before deciding on the next steps. All players are expected to follow this directive for the remaining games of the World Cup.” What happens next is anybody’s guess but the issue of racism in South African cricket was laid bare during the recent Social Justice and Nation Building hearings. The many revelations that came out included singing racist songs, giving offensive nicknames and creating a less than ideal work environment.

The likes of Graeme Smith, current CSA Director of cricket, and Abraham Benjamin (A.B.) de Villiers have asked time to frame their responses while current head coach, Mark Boucher, wrote a written apology apart from making himself available to explain in person. In his note, he said: “We were not only naive but were also ill-equipped to deal with the new environment in which we found ourselves,” he tried to explain.

“To my certain knowledge there had not been any briefing or discussion by CSA as to how we deal with the legacy of Apartheid, how players and management should deal with the additional pressures placed on them by the country and the media…” On the field against West Indies, they showed considerable character to put behind what happened before the match to stay alive in the tournament. After restricting the defending champions to a below-par 143, thanks largely to a puzzling Lendl Simmons innings (16 off 35), Aiden Markram (not out 51 off 26) and Rassie van der Dussen (43 not out) put on an 83-run partnership to take the side to an eight-wicket win.

Kohli losing popularity within team, Kumble to take over from Shastri!