Quote from a Legend – Martina Navratilova 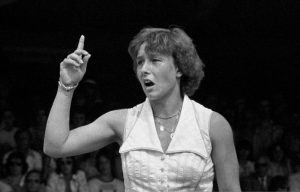 Martina Navratilova, born 18 October, 1956 and presently aged 64, is a Czech-American former professional tennis player. Widely considered among the greatest tennis players of all time, Navratilova won 18 Grand Slam singles titles, 31 major women’s doubles titles, and 10 major mixed doubles titles, for a combined total of 59, marking the Open Era (since 1968 when the Grand Slam tournaments allowed professional players to compete with amateurs, ending the division that had persisted since the dawn of the sport in the 19th Century) record for the most Grand Slam titles won by a single player. Originally from the Communist nation Czechoslovakia during the height of the Cold War, she was stripped of her Czech citizenship when, in 1975 at the age of 18, she asked the US for political asylum and was granted temporary residence. She became a US citizen in 1981 and in 2008, she re-acquired Czech citizenship. Since 1981, she had identified herself as a bisexual and a lesbian.

October 7, 2020 byCharindra No Comments
A female employee of the cleaning section of the Katunayake Bandaranaike International Airport has been diagnosed with the coronavirus.