Quote from a Legend 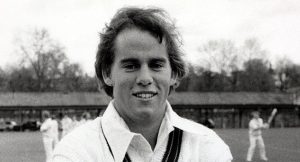 “(Helen Cohen Alon is) some dopey, hairy-backed sheila (who is) trying to dob him (Shane Warne) in on the other side of the world.”

Hookes said so in August 2003 describing the woman named Helen Cohen Alon who alleged that Shane Warne harassed her by telephone. “Sheila” is an Australian slang for a girl or woman and “dob” is to report a person to someone in authority for a wrongdoing. For this statement, Hookes had to apologise later, but the famous saying remained to be one that showed solidarity from a friend to another friend, irrespective of what is right and what is wrong.

David William Hookes (1955-2004) was born on a 3 May. He was an Australian cricketer, broadcaster, and Coach of the Victorian cricket team. An aggressive left-handed batsman, Hookes usually batted in the middle order. His international career got off to a sensational start in the famed Centenary Test at Melbourne in 1977 when he hit England Captain Tony Greig for five consecutive boundaries. But a combination of circumstances ensured that Hookes never became a regular in the Australian team.

For many years, he was a leading figure in Australian domestic cricket, most notably in his role as Captain of South Australia. Wisden once called him, “a first-class destroyer of second-rate bowling”. Once angered by Victorian Captain Graham Yallop’s late declaration in a Sheffield Shield match at the Adelaide Oval in October 1982, Hookes promoted himself to opening batsman and proceeded to score a century from 34 balls, at the time the fastest century scored in first-class cricket. He finished his career as the highest run-scorer in Sheffield Shield history.

An outspoken man who had several brushes with the game’s officials, Hookes retired at the end of the 1991-92 season and pursued his media career. His popularity among players and his reputation for strong leadership led to the appointment as Coach of the Victorian team in 2002. The team enjoyed success under his tutelage, but Hookes died, aged 48, of the most unfortunate circumstances after being punched by a hotel bouncer outside a Melbourne pub where he had been drinking with Victorian players following their victory in a match earlier in the day.

August 29, 2021 byRevatha No Comments
Major sports happenings on the day