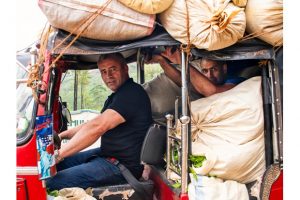 Yet again after a lapse of a year, the boys from Top Gear are back to give us a ride full of thrills, chills and just a lot of high-energy fun.

The trailer for Top Gear Season 26 was released today (14), hinting at what the audiences are to expect from the series, all from riding off-road in tuk-tuks, Matt LeBlanc in a wingsuit, fording rivers in people carriers and causing chaos on a race track.

The BBC told fans to expect stunning photography, state-of-the-art super cars and celebrity guests, and after the series was in Sri Lanka to film, we should be doubly excited as we may be in for a treat.

Season 26 of the BBC Two hit TV series, Top Gear is said to start filming in the next few weeks co-hosted by Matt LeBlanc, Chris Harris, Rory Reid and the all famous ‘Stig’ with the addition of two new presenters former England cricketer Andrew “Freddie” Flintoff and Take Me Out presenter Paddy McGuinness.

The previous season aired in the second week of February, therefore this year’s season is also expected to air around the same time period.

January 13, 2021 byJennifer Anandanayagam No Comments
Sri Lanka’s tourism sector, which is one of the top three foreign exchange earners for the country, dealt with a severe blow by the Covid-19 pandemic. Since the island closed its airports and seaports