Railways to be gazetted as essential services today 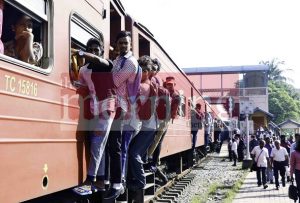 The gazette notification declaring railways as an essential service will be issued today, according to State Minister of Transport & Civil Aviation Ashok Abeysinghe.

The decision was taken by the government as a last resort to the indefinite strike action launched by railway trade unions from midnight of September 25th which has inconvenienced commuters.

The State Minister stressed that continuing the strike was unfair even after  demands had been met by the government.

June 17, 2020 byTSM Web Desk No Comments
The Central Bank of Sri Lanka (CBSL) yesterday (16) appointed a committee to formulate a solution pertaining to the issue of unlicensed leasing companies.

January 3, 2021 byLahiru Pothmulla No Comments
Opposition Leader Sajith Premadasa said today the government should bring down all approved COVID-19 vaccines immediately if it cares about the people.