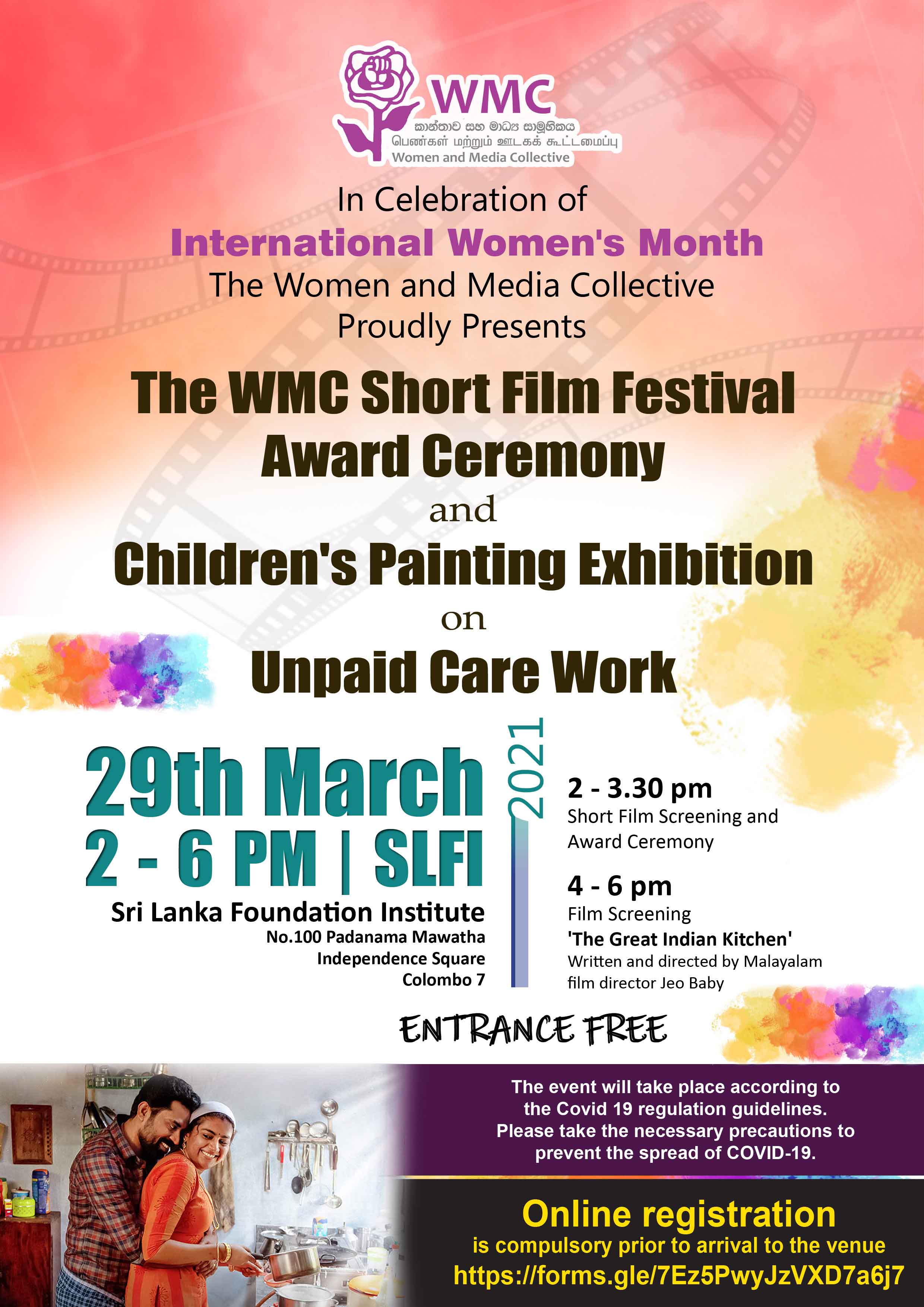 The Women and Media Collective (WMC) carried out a scriptwriting competition under the theme “Housework is Work: Value the Unpaid Care Work done by Women” in 2020. This included a workshop for selected scriptwriters, followed by a short film competition based on these film scripts. The scripts will be featured as short films on 29 March, where a prize-giving will be held for the winners of the competitions.

Speaking to WMC Team Project Officer Velayadale Jayachithra, she stated that this competition aims to shed light on the unpaid care work women do. Men and women from all ethnic and religious communities had an opportunity to start a discussion on gender equality and unpaid care work through these competitions.

In addition to this, an art competition for children was also held under the theme “How I Understand Housework”. In order to start discussions on this theme, the art competition invited kids from age groups eight to 10, 11-13, and 14-16, to submit their artwork, as change begins from childhood.

The Covid-19 pandemic forced children and most household members to stay at home for a long period of time. These factors resulted in women having to shoulder an even higher burden of the care work at home.

Talking about why they chose to focus on this issue, Jayachithra noted that women’s unpaid care has not been recognised as labour in Sri Lanka. “Women make up 52% of Sri Lanka’s population, out of which, according to the Census and Statistics Department (2019), only 35.4% of women are considered to be ‘economically active’ and included in the labour force. Of the 73.7% of women who are considered to be ‘economically inactive’ or not contributing to the national economy, 62.4% are categorised as ‘engaged in housework’ and are not recognised as contributing to the economy.”

She also explained that the labour force is defined by an assessment of an individual’s labour that contributes to the economy of a country. Even though these household activities directly or vicariously contribute to the economic status and development of the families and of the country, mainstream economic institutions that measure labour force participation do not take these factors into consideration.

Using an example to justify their point further, Jayachithra stated: “If a maid is employed to attend to household work, she is paid a wage and, as an employee, defined as contributing to the economy, and is also included in the labour force. However, a woman, despite whether she is in paid employment or not, who fulfills all the care work in her home for her family is not included in the labour force, and her efforts are written off as her ‘responsibility as a woman’.”

Care work is essential for the wellbeing of a country’s citizenry and its economic development. However, it can be seen that a majority of the unpaid care work is shouldered by women. Childcare, education, eldercare, caring for the sick, home gardening, cooking, and collecting materials essential for cooking such as water and firewood are all done mainly by women and female children. All work done without a monetary value assigned can be considered unpaid care work.

With this film festival, they want to ensure the work done by women could be divided amongst the household and the men take equal responsibility. She observed that although women may receive some help from their husbands or family members from time to time, most men and boys are not socialised to engage in household work. Where males, husbands, or sons do share housework, instead of appreciating this engagement, society tends to look at them with disdain.

While both men and women contribute to the development of the country, unpaid care work must be given a higher recognition in society and that change needs to begin at home.

She commented that the availability of social services and support systems that women and men can access are also important factors, adding that therefore recognising unpaid care work and creating change in society accompanied by investment in the provision of care services will contribute to the social, economic, and political upliftment of many women.

“If women are unable to attend to care work for any length of time, its effect on the family, the community, and the country’s economy is something to reflect upon,” she concluded.

May 4, 2021 byNews Admin No Comments
Colombo was all agog when the countdown to George Keyt’s 90th birthday began in 1991; 17 April was the precise date. Giving a greater dimension to the event was that this was NOT a posthumous, psyched