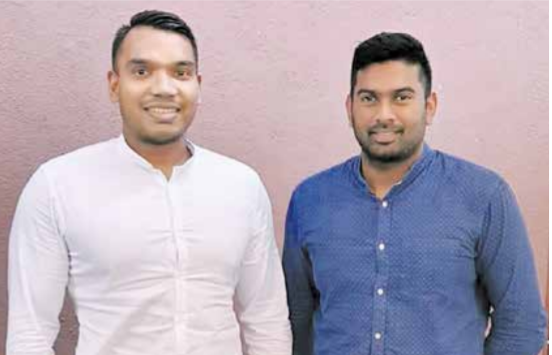 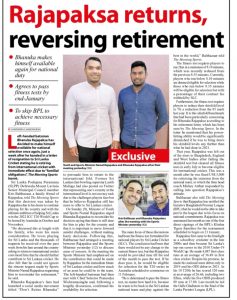 Left-handed batsman Bhanuka Rajapaksa has decided to make himself available for national selection once again, just a week after he handed in a letter of resignation to Sri Lanka Cricket stating he is retiring from international cricket with immediate effect due to “familial obligations”, The Morning Sports learnt.

Sri Lanka Podujana Peramuna (SLPP) Dehiwala-Mount Lavinia Senior Municipal Council member Kris Balthazaar, a family friend of Rajapaksa, told The Morning Sports that this decision was taken by Rajapaksa due to his desire to continue playing for his country and with the ultimate ambition of helping Sri Lanka win the 2022 ICC T20 World Cup to be hosted by Australia in October and November.

“He discussed this at length with his family, who were his main consideration. He loves playing
or Sri Lanka and the thousands of requests he received over the past week from his fans around the country asking to return to international cricket convinced him that he should further contribute to Sri Lankan cricket. He also felt that he could not ignore the sincere request made by Sports Minister Namal Rajapaksa requesting him to reconsider his retirement,” he said.

Bhanuka Rajapaksa’s fans had launched a social media movement titled “Don’t Retire Bhanuka”
to persuade him to return to the international fold. Former Sri Lankan fast-bowling superstar Lasith
Malinga had also posted on Twitter that representing one’s country at the international level is not an easy task due to the challenges players face but that he believes Rajapaksa still has more to offer to Sri Lankan cricket.

On Sunday (9), Minister of Youth and Sports Namal Rajapaksa urged Bhanuka Rajapaksa to reconsider his decision saying that there is still time for him to play for the country and that it is important to move forward amidst challenges, without making hasty decisions. Following this, Balthazaar had arranged a meeting between Rajapaksa and the Sports Minister yesterday (12) to discuss areas of concern. At the meeting the Sports Minister had emphasised on the contribution that could be made by Rajapaksa for the immediate future of Sri Lankan cricket and how much of an asset he could be to the team. The left-handed batsman had then met with Chief Selector Pramodya Wickramasinghe and, following a lengthy discussion, confirmed his availability for selection.

The main focus of these discussions had been the fitness test formulated for national players by Sri Lanka Cricket (SLC). The conclusion had been that there would not be any change to the current fitness test, but that Rajapaksa would be provided time till the end of the month to pass the test. If he does pass it, he would be eligible for selection for the T20 series in Australia scheduled to commence on 11 February.

“He is determined to pass the fitness test, no matter how hard it is, because he wants to be back in the Sri Lankan national team and play against the best in the world,” Balthazaar told The Morning Sports.

Furthermore, the fitness test requires players to reduce their skinfold level to 70, a reduction from the 85 mark last year. It is this skinfold benchmark that had been particularly concerning for Bhanuka Rajapaksa according to his retirement letter, which has been seen by The Morning Sports. In the letter he mentioned that his powerhitting ability would be significantly diminished if he was to bring down his skinfold levels any further than what he had done in 2021.

That year, Rajapaksa was left out of the tours to Bangladesh, England and West Indies after failing the
skinfold test but cleared all fitness tests in early July to become eligible for international cricket. This was a month after he was fined US$ 5,000 for criticising his omission from the national team, to which the then head coach Mickey Arthur responded by calling into question Rajapaksa’s attitude.

Balthazaar also told The Morning Sports that Rajapaksa has notified the lucrative Bangladesh Premier League (BPL) that he would not be able to take part in the league due to his focus on national commitments. Rajapaksa was announced last month as one of the four direct signings of the BPL’s Khulna
Tigers franchise for the tournament scheduled to begin on 21 January.

Rajapaksa first came to the limelight as a schoolboy cricketer in the late 2000s and then became Sri Lanka’s top run scorer in the 2010 Under-19 World Cup. He made 4,087 first-class runs at an average of 36.49 in first class cricket. Despite his promise, he made his national team debut only in 2019 and his ODI debut in 2021. In his 18 T20Is he has scored 320 runs at an average of 26.66, including two fifties, while his five ODIS produced 89 runs at 17.80. Last month he led the Galle Gladiators to the final of the
Lanka Premier League (LPL).

March 14, 2019 byRevatha No Comments
He has been asked to come back in order to discuss Sri Lanka team’s preparation plans for the upcoming ICC Cricket World Cup 2019

Ganguly out of hospital!

January 5, 2021 byRusiru Keppetipola No Comments
Former India Captain and their present cricket board President Sourav Ganguly may be discharged from hospital today (5), Indo media predicted yesterday (4). Ganguly was hospitalised in Kolkata on Satu