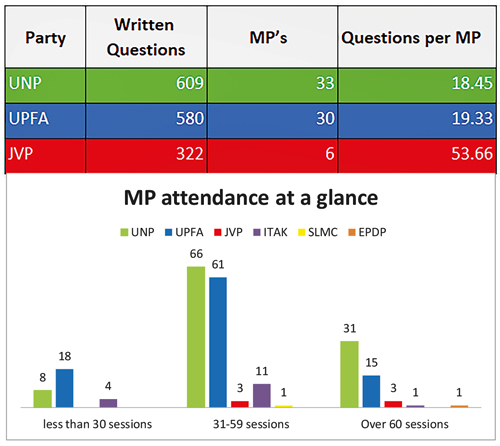 The budget allocation for recurrent and capital expenditures of the Parliament of Sri Lanka stands at well over Rs. 3.5 billion for 2019, out of which over Rs. 2.7 billion is allocated for recurrent expenditure.

While it proved difficult to obtain the cost incurred for hosting each parliamentary session from the relevant department, one could guesstimate by looking at the budgetary allocations for Parliament’s expenses just how much taxpayers’ money is used to facilitate parliamentary sessions for a month, and the cost incurred to maintain the facilities and employees to attend to its various functions.

Meanwhile, the March 12 Movement had revealed that for each parliamentary session that is held, the cost incurred is accounted at approximately Rs. 4.5 million.

“Though there are 225 members in Parliament, only 25-30 MPs have actively contributed to bringing in reforms for laws and implementing policies over the past sessions. At a time where the country is looking at tax revenues increasing on a daily basis, there is a question as to whether our public representatives are spending our tax money wisely so that the citizens could reap the benefits,” March 12 Movement Steering Committee Member Rohana Hettiarachchi stated.

Glancing at the budgetary allocations for the year, it is impossible to ignore that the larger allocation is for “other allowances”, which is estimated at Rs. 705 million. Speaking to The Sunday Morning, Parliament Secretary General Dhammika Dasanayake stated: “According to the allowances and benefits provided to the Members of Parliament, an MP will get a sitting allowance of Rs. 2,500 for attending each Parliament meeting, and another Rs. 2,500 as committee allowance for attending committee meetings that are held on non-sitting days. Apart from that, each member is entitled to an office allowance of Rs. 100,000 per month.”

Furthermore, an MP is entitled to a fuel allowance based on the distance from Parliament to the electorate the MP was elected from. A telephone allowance of Rs. 50,000 per month is given to settle their landline and mobile phone bills. The transport allowance allocated for an MP’s personal staff is Rs. 10,000 per month for a maximum of four members at Rs. 2,500 each. The MPs are also entitled to stamps amounting to Rs. 350,000 per year, so they could use the postal service free of charge.

Meanwhile, Parliament Finance Director K.G.M. Jayashantha had recently stated that a total of Rs. 120 million is spent annually on food and beverage prepared for consumption by MPs, parliamentary staff, and its visitors. Additionally, Rs. 9 million is spent on purchasing drinking water. For electricity and telephone facilities, an estimated amount of Rs. 80 million and Rs. 14.5 million is spent per year, respectively.

“On hearing this, Speaker of Parliament Karu Jayasuriya recommended that food preparations be done according to the number of persons present for each sitting. He also instructed that a headcount of how many persons required meals be taken on a prior date.”

Among these, 333 questions were answered after requesting for more time to provide information.

JVP MP Anura Kumara Dissanayake recently raised a concern that questions required to be answered by ministers are not furnished within the given time period, due to the absence of the subject minister during the parliamentary session or the subject minister requesting for more time to get back with an answer.

The Sunday Morning contacted Dissanayake to clarify whether this was a habitual occurrence at Parliament and whether there was a time frame allotted for each question to be answered.

“The situation in question for last week’s concern was Daya Gamage had been evading my question on his expense account for the Samurdhi ceremonies held this year. He should have provided us with the answer at least on the third occasion, but it took well over nine sessions. Gamage finally answered my question due to my persistence.”

Between 8 January and 1 August, the Parliament convened 70 times, and out of the 225 members, only 51 members attended over 60 sessions, with 30 members attending 30 sessions or less and 144 members managing to attend sessions 30-60 times during the past seven months.

For the entire year, in only two occasions did the chamber see attendance above 200 at a session, whereas the chamber saw attendance from 100-200 in 61 sittings and attendance below 100 in five sittings.

This year, Parliament was adjourned for the next session on two occasions – in January and July, due to lack of quorum when issues of national importance were to be taken up for debate, with MPs walking out of the chambers to indicate that they would not give ear to the issues or cast their votes if required.

When inquired as to whether there was a way for Parliament to gauge productivity or the attendance of MPs, Dissanayake informed that there are no such procedures or regulations to monitor these activities.

Dissanayake is of the view that the membership should be cancelled in such an instance.

“People appoint politicians to Parliament expecting that they would regularly attend the sessions and address the country’s issues, but when certain members misuse their privileges by continuously taking leave from sessions, they are breaking the trust of their voters.”

Chief Opposition Whip Mahinda Amaraweera, commenting on the quorum during Parliament debates, stated: “Quorum only requires for 19 members (i.e. excluding the Speaker/Presiding Member) out of the 225 to be present at the chambers. Most often, questions are raised by the Opposition ministers and members of Parliament and the Government should be present to provide the required answers. The main responsibility of maintaining quorum therefore falls on the Government, and it goes without saying that the Opposition too needs to be responsible.”

Amaraweera also informed that most often, the absence of the subject minister who is to provide the answers to the questions that were put forth would always delay the questions being answered on time. “In the absence of the subject minister, it is the responsibility of the Chief Government Whip or a delegated minister to present the answer that was provided. However, it becomes a challenge when we need to get further explanations and have to wait for another session to get them.”

During Thursday’s debate, the quorum was called at several occasions and Member of Parliament Ananda Aluthgamage raised the concern of certain subject ministers not being present to answer questions.

During the debate of the People’s Bank Bill, UNP MP Ajith Mannapperuma stated: “The Opposition was trying to halt the debate, stating that there was lack of quorum, and while MP Aluthgamage requested for a quorum call, many MPs from the Opposition just walked out of the chambers. The Opposition too needs to have the responsibility to be there for a debate to continue, and when they irresponsibly walk out of the chambers it becomes a challenge to us.”

Manapperuma further stated that as public representatives, it is the responsibility of the Government and the Opposition to discuss public issues and to be present at the parliamentary debates to pass bills after ironing out the concerns that the public might have pertaining to them.

Celebrating the new year amidst Covid-19

December 27, 2020 byNethmi Liyanapathirana No Comments
Sri Lanka’s hospitality sector is one of the key contributors to the national economy and therefore an indispensable component of its GDP. However, with the Covid-19 pandemic taking reins this year..

July 19, 2020 bySarah Hannan No Comments
Another week of holidays for schools as well as tertiary and private education institutes is now setting the timelines of Sri Lanka’s education sector involved a struggle to follow a plan