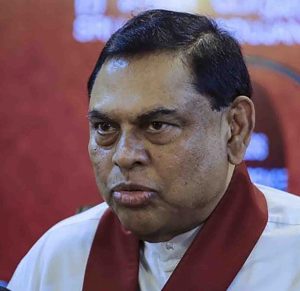 President Ranil Wickremesinghe charged that Frontline Socialist Party (FSP) Leader Kumar Gunaratnam was behind the “aragalaya” – noting that the latter holds Australian citizenship and should thus be rejected by the public in a manner similar to the public backlash against Sri Lanka Podujana Peramuna (SLPP) National Organiser and former Minister Basil Rajapaksa – while assuring that a similar protest movement would not be allowed to occur.

Speaking in Parliament yesterday (23), he said that although there are differences within the House, there is no need for intense conflict. He said that the country descended to such a level during the “aragalaya”, and recalled the incidents of houses and properties belonging to MPs being set ablaze and destroyed. He noted that of the 225 MPs in Parliament, 196 were elected by the people, and that thus setting fire to the homes of MPs – be they from the ruling party or the Opposition – is not something that should occur. As these MPs had been elected to office by the people, he said, they should be given the opportunity to work, and be taken care of.

“What happened on 9 July? The then-President (a reference to former President Gotabaya Rajapaksa) was kicked out. What happened to the President’s House? Go and see what has been destroyed there. After that, the Presidential Secretariat was also taken over by the protestors. They set my house on fire, because I did not resign at the time. How could I resign? I held the majority in Parliament. If any other person had the majority, or an all-party Government was formed, I could have left. Then, on 13 July, they came to capture Parliament. They were going to capture this House and say that they would form a government. If this happened, there would have been a puppet government,” he said.

“Who was behind this? It was Gunaratnam and the FSP. Now we have passed the 21st Amendment to the Constitution. Many people said that Basil Rajapaksa had to resign because he holds dual citizenship. Let’s acknowledge this – but then what can one say about the FSP? Its leader (a reference to Gunaratnam) is also a dual citizen. He is a citizen of both Australia and Sri Lanka.

“Basil Rajapaksa was rejected on these grounds, so why are we trying to give power to someone who has dual citizenship? They said that there were charges against Basil Rajapaksa. When I was the Prime Minister, he was taken before court and remanded too. What are the charges against Gunaratnam? They are regarding killing Indian Peace Keeping Force (IPKF) soldiers in the North during the war.”

Wickremesinghe also said that anyone is free to hold meetings and protest against him, but they should do so after obtaining Police approval, and without blocking vehicles on the roads. However, if anyone does so without obtaining the necessary approval of the Police, they (the Police) have been instructed to stop such gatherings.

Meanwhile, National People’s Power (NPP) MP Vijitha Herath, in reply to the President’s statement on the “aragalaya”, said that it was because of the people’s struggle that Wickremesinghe became President. Rather than discrediting and suppressing it, he said, the President should pay tribute to those who engaged in it.

“Our country descended into an unprecedented economic crisis. As a result of this, the people suffered in different ways. The suffering people came to the streets and that is how the ‘aragalaya’ began. For the first time in the country, the people rose up to oust an Executive President. It was a great popular uprising. It was because of that struggle that many changes took place in the political sphere. Wickremesinghe took up the President’s seat thanks to the ‘aragalaya’. He should pay tribute to those who engaged in the ‘aragalaya’ by lighting an oil lamp and burning incense sticks every morning and evening. Instead, he is talking about suppressing the ‘aragalaya’ by deploying the Army and the Police,” he said.

After millions of people gathered in Colombo demanding the resignation of then-President Gotabaya Rajapaksa on 9 May, the latter fled the country. Following his resignation, Wickremesinghe, who was elected to Parliament through the National List of the United National Party and was appointed Prime Minister by Gotabaya Rajapaksa, became President after a majority of SLPP Members voted in favour of him in a Parliamentary vote. Since his election as President, hundreds of activists of the “aragalaya” have been arrested and placed in remand custody, while almost all protests in Colombo and other areas are currently being blocked and dispersed by the Police.

September 6, 2022 byNews Admin No Comments
The Welfare Benefit Board (WBB) under the Ministry of Finance, Economic Stabilisation, and National Policies is to introduce a quick response (QR) code-based system to identify those who are in need o

Isolation order would be extended if inmates do not adhere to quarantine laws: Police Spokesman

January 25, 2021 byMihi Perera No Comments
"The inmates of isolated areas should comply with the quarantine laws imposed on them, and if not, the isolation order of that particular area will be extended," stated the Police Spokesman DIG Ajith