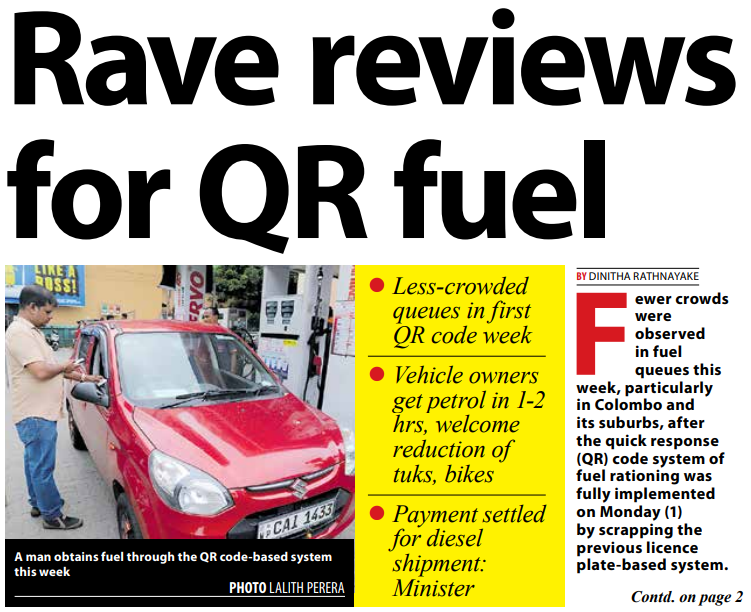 August 5, 2022 by Dinitha Rathnayake No Comments

Fewer crowds were observed in fuel queues this week, particularly in Colombo and its suburbs, after the quick response (QR) code system of fuel rationing was fully implemented on Monday (1) by scrapping the previous licence plate-based system.

Speaking to The Morning, several vehicle owners said that they were able to obtain fuel after less than a couple of hours of waiting.

“I think that this QR system works very well. I was surprised when my car got petrol only after waiting for one hour in the queue, where previously we had to wait for days to get fuel,” one vehicle owner said.

“I was waiting for 10 days to get fuel before the QR system, but today, I was able to get fuel within just two hours. It was unbelievable. After waiting in long queues, I think that the people are more than happy to stay one or two hours to get fuel,” another vehicle owner said.

“I see fewer three-wheelers and bikes in queues which is a piece of good news. When I was in the queue, there were only 10 bikes,” yet another vehicle owner noted.

Another vehicle owner expressed surprise claiming he was able to obtain petrol after waiting in a queue for less than 30 minutes. “The QR system should have been implemented earlier,” he said.

The number plate system, the token system, and other systems put in place to manage Sri Lanka’s fuel crisis have not been in use this week since Monday (1).

All three-wheelers have been asked to register their vehicles at their respective Police stations and to nominate their filling station of choice. The move comes after three-wheeler drivers have been accused of being a “fuel mafia”, selling fuel in the black market. They have also been accused of creating longer fuel queues, and causing scuffles at filling stations. Several fights have broken out in fuel queues, resulting in at least two related deaths since the queues started in April of this year.

Meanwhile, people using power generators, garden equipment, machinery, and other equipment that require fuel must register at the respective Divisional Secretariat offices by choosing the type of fuel that they need, the weekly fuel requirement, and the filling station that they wish to get fuel from.

An allocated quota will be provided to the Police Department from the petrol stations selected for each Police station, and the quota to be given to those petrol stations will be informed in the future.

Also, the Ministry has informed the public to take steps to send photographic or video evidence to the WhatsApp number 0742123123 about filling stations and people who do not follow instructions, and engage in fuel stockpiling, selling, related activities or providing fuel illegally.

Meanwhile, Minister of Power and Energy Kanchana Wijesekera, in a Twitter post about an update on fuel purchases, said payments were settled for a shipment of diesel. According to him, the unloading process of this cargo was expected to begin on Wednesday (3).

He further stated that the Ceylon Petroleum Corporation (CPC) has entered into a one-year agreement for the supply of jet fuel and will receive the first cargo between 12 and 14 August.

In the meantime, part advance payments have been made for two shipments of petrol and diesel.

Wijesekera also requested users of the National Fuel Pass not to display their respective QR code anywhere visible to others and to keep their personal QR codes in a secure place to make sure no one else uses it illegally. In a Twitter post, the Minister also said that the option to delete a National Fuel Pass profile and the option to register again is now available.

May 5, 2020 byTSM Web Desk No Comments
Three more persons have tested positive for Covid-19 a short while ago, raising the total number of cases in the country to 765.

August 28, 2021 byNews Admin No Comments
Medical researchers in the country earlier last week revealed results of the postmortem examinations carried out on the remains of 100 persons who had died of Covid-19 which uncovered that nearly 30%