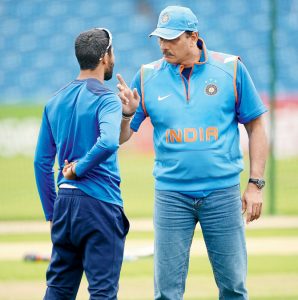 Ravindra Jadeja (L) was named in the 13-man squad for the Perth Test even when he was not fully fit, India’s coach Ravi Shastri has revealed

Ravindra Jadeja has been carrying an injury from even before he landed in Australia, and yet he was named in the 13 for the Perth Test even when not fully fit, India’s coach Ravi Shastri has revealed. In trying to defend himself against criticism from all corners regarding the selection of the XI in Perth, Shastri has not only opened himself up to more criticism, but has also gone against what captain Virat Kohli said after the end of the Test.

Kohli said that India would have played four fast bowlers even if the leading spinner R Ashwin had been fit. India went ahead with four quicks, a move that backfired and came under severe criticism from former players, most notably Sunil Gavaskar. Not only did India not have a spinner who could provide them control with the ball – the opposition spinner Nathan Lyon was the Man of the Match – they also fielded four No 11s by selecting Umesh Yadav ahead of Bhuvneshwar Kumar.

However, Shastri took a potshot at the critics, saying they had no idea of the facts and that if Jadeja had been fully fit, he would have played. In the same breath, Shastri also went on to suggest they would risk Jadeja at 80% in Melbourne, which is roughly where he was at in Perth, if Ashwin is not back to full fitness.

“When you are millions of miles away, it is very easy to fire blanks,” Shastri said of the critics of the selection. “Problem with Jaddu was that he had taken an injection four days into coming to Australia because of some stiffness in his shoulder, and it took a while for that injection to settle down. So when you look at Perth, we felt he was about 70-80% fit, and we didn’t want to risk that in Perth. If he is 80% here, he will play, that’s the answer.”

May 15, 2021 byRevatha No Comments
As pandemic continues to pose challenges…

May 4, 2021 byRevatha No Comments
Man United vs. Liverpool clash postponed