Below Deck Mediterranean alum Anastasia Surmava has built an idyllic life for herself in Sri Lanka, following her turn on Season Four of the nautical-themed reality television show. Surmava was a star of the popular reality show that chronicles the lives and work of the crew behind a megayacht sailing in the Mediterranean.

Following her role in the show where Surmava moved from third stew to chef for a few charters during the season, she moved to Sri Lanka, settling down on the south coast with her boyfriend Hunter Jakupko, who she has known for years and been dating for a little over a year. 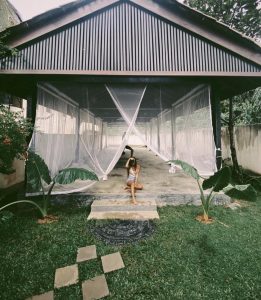 The relationship began when Jakupko reached out to Surmava over Instagram when she had returned home to Vermont for the Summer the year before her last appearance on Below The Deck Mediterranean. Surmava said yes and the pair have been together ever since. Surmava’s pet project in Sri Lanka is the sustainable yoga studio and cafe Ajna, situated in Midigama. Although currently closed at the moment due to the pandemic, Ajna was opened in November 2019 in partnership with a Sri Lankan family-owned and operated business. Surmava serves as Project Director and Executive Chef.

Ajna focuses on well-being and connecting with the world on a physical, emotional, and spiritual level. Ajna itself (pronounced (ah-ju-na) is the Sanskrit name for the “third eye chakra”, which symbolises this sort of connection. Ajna is a space to nourish the body and the mind while still being kind to the environment.

The pandemic has done little to curb Surmava’s sense of fun though, with Surmava creating quirky content for 79,000 Instagram followers, including quarantine kitchen cooking tutorials, interesting giveaways, and in the early days of the quarantine, treating viewers to a video of herself and Jakupko giving each other makeovers.

September 26, 2021 byNews Admin No Comments
As Sri Lanka grapples with the Covid-19 pandemic, almost every aspect of our lives have been altered. With panic and uncertainty gripping our hearts, the constantly fluctuating numbers of patients, in

May 29, 2019 bythemorninglk No Comments
The exact number of dementia patients in Sri Lanka is unknown. However, studies conducted indicate an emerging problem.