Recognising the power of everyday heroes 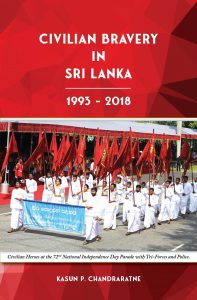 There’s something magical about books that capture the stories of real people, and 6 November 2021 will see the official launch of a unique book that tells the stories of everyday heroes who have gone above and beyond to protect the sanctity of the lives of those around them, be they human lives, animal lives or even plant lives.

Published by Jam Fruit Tree Publications, Civilian Bravery in Sri Lanka is a book that chronicles not just these everyday heroes, but also the story of the Foundation for Civilian Bravery, a small group of passionate individuals who have, since 1993, fought tirelessly to share the stories of these courageous souls from all walks of life.

Brunch chatted with Civilian Bravery in Sri Lanka author and Foundation for Civilian Bravery President and Founder Kasun P. Chandraratne to learn more about this unique new book and the foundation that has been telling the stories of civilian heroes for nearly three decades.

Civilian bravery, to Chandraratne, is quite simply, the apex of human bravery, it is when an everyday person – a civilian – risks his own life to help someone else who is in mortal peril, be that human, flora, or fauna.

Speaking on why it is so hard in our context to define civilian bravery, and set it apart from what the majority of our society sees as bravery, like acts of military bravery for example, Chandraratne explained that this is mostly to do with how we as a nation and civilisation have grown from ancient times.

“In our country, we had kings, and a king doesn’t allow other civilians to become heroes. In 2,600 years of Sri Lankan history, we have not heard of any civilian heroes, we have heard about kings and military heroes,” Chandraratne said. “This thinking is prevalent throughout practically the whole of Asia because they have also had kings.” 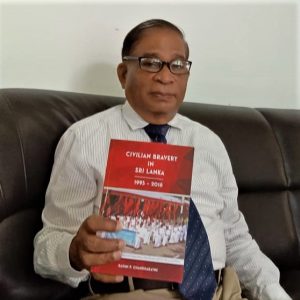 The problem with military acts of military bravery, or as Chandraratne calls them, acts of gallantry, is that they are predicated on power and might, on destroying the enemy, whereas bravery, and civilian bravery, in particular, focus on protecting and saving lives.

The Foundation for Civilian Bravery

The idea for honouring civilian bravery, and by extension, the Foundation for Civilian Bravery, was something that struck Chandraratne quite by chance. After completing his university education, in the early 1990s, Chandraratne was working in Pettah when he passed by a vendor selling issues of Reader’s Digest at a discounted rate (fun fact: At the time, Reader’s Digest sold for about Rs. 5 an issue, and this vendor was selling issues at Rs. 1 each). Chandraratne bought two issues, and a story in one of those issues was what set him on the road to campaigning for the recognition of civilian bravery.

The story, in itself, was simple but inspiring – a father and his young daughter (of around nine to 12 years old, if Chandraratne’s recollection serves him correctly) out on horseback stopped for a walk when the father was gravely injured when a horse kicked him in the head. Despite the severity of the injury, (Chandrartne recalled the story saying his skull had been split), his daughter, without panicking, took him to a public place where people could see her father was injured and get help.

One of America’s civilian heroism organisations, the Carnegie Hero Fund Commission, was so inspired by the bravery this girl had shown in staying calm and making decisions that ended up saving her father’s life, that they recognised her bravery with a Carnegie medal.

Reading this story made Chandraratne wonder why such a model couldn’t work in Sri Lanka, and, with his experience as a lawyer, he began drafting an act to recognise civilian bravery, and recognised that in our society, we simply do not recognise such acts of heroism, especially form the everyday non-affluent Sri Lankan.

Having enjoyed drafting an act recognising civilian bravery, Chandraratne presented it to then-President Ranasinghe Premadasa by post, and within a week was invited to present it to his officer at the Presidential Secretariat. Unfortunately, he didn’t receive the response he was hoping for. “They didn’t give prominence to the idea, I thought,”  Chandraratne said, adding: “Their number one question was: ‘Are there even such people in the country?’ At the time, there was a lot of killing and death going on because of the war, and there wasn’t a lot of saving. The proposal wasn’t successful, and I was disappointed, but I didn’t want to give up, so I started it by myself, creating a Trust with a few friends of mine, and whether by the blessings of God, or just karma, it was successful. My friends rallied around me and supported me.”

Locally, over the years, Chandratne has formed a very close relationship with the Government and the military, with Sri Lanka’s Speaker being the Chief Patron, and an Executive Council of many distinguished members of the armed forces and police.

Over its 28-year-history, Chandraratne has found that one of the biggest challenges to recognising civilian bravery lies in our social mindset.

“In our society, bravery is linked with the level of society that people belong to. If an ordinary labourer or farmer risks his life to save someone else’s, nobody will be concerned. Personally, I feel that this outlook is the cause of many of our country’s problems,” Chandraratne said. “Whether you’re a labourer, a farmer, or from any other walk of life, the most precious thing is life, and your life cannot be valued differently simply because of your background or education. That status of equality is not there in our social structure. Our social structure formed by being under kings and rulers, and so, that idea of one life being greater than the other, persists,” he added.

One issue that pushes this narrative is a lack of role models; quoting a speech Deshamanya Professor Nandadasa Kodagoda made at one of Foundation’s ceremonies, Chandraratne said: “The issue is we don’t learn from society. Prof. Kodagoda told me: ‘The younger generation is useless’, and I am also saying the same thing now, wondering where we have gone wrong. The older generation is also responsible because they don’t produce or put forward the necessary models to society.”

Affecting change is not easy, and is not a short-term strategy because it’s changing our innate social structures and mindsets. But this can happen slowly and a little bit at a time, by getting people, even on a micro-scale, to think about civilian bravery, and more importantly, how civilian bravery can come from anyone, from any walk of life.

Documenting the first 25 years of the Foundation’s journey, Chandraratne shared that this unique volume of inspiring stories comes in two parts, and is being published by Jam Fruit Tree Publications, and is now available for purchase to those interested in learning about Sri Lanka’s remarkable civilian bravery.

The first part of Civilian Bravery in Sri Lanka speaks about the Foundation for Civilian Bravery, the concept of civilian bravery, and how it differs from military bravery.

The second part touches on the stories the Foundation for Civilian Bravery has recognised since 1993 up to its 25th anniversary in 2018.

Chandraratne shared that he has been working on Civilian Bravery in Sri Lanka for five years, gradually writing, editing, and working on getting the concepts right and recording the Foundation’s remarkable stories, from their very first award in 1993, awarded posthumously ferryman of Ukwatta in Kalutara who died in his attempt to save six passengers when his ferry capsized in the middle of the river.

Civilian Bravery in Sri Lanka launches officially on 6 November, with a virtual launch event featuring a book review by Arun Dias, and will be graced by the presence of Speaker of Parliament Mahinda Yapa Abeywardena, Former Speaker of Parliament Karu Jayasuriya, and dignitaries from the international civilian bravery organisations who have supported the Foundation for Civilian Bravery over the years – the Victoria Cross and George Cross Foundation (UK), The Royal Humane Society (UK), the Carnegie Hero Fund Trust (UK), The Royal Humane Society of Australasia Inc, The Royal Humane Society of New South Wales, and the Carnegie Hero Fund Commission (USA).

Civilian Bravery in Sri Lanka is available for sale at The Jam Fruit Tree Bookshop In Colombo 3 for pick up at the store or islandwide delivery. Orders for delivery can be also placed by calling or WhatsApping 0727268078.

Stand out with ‘The Butler’

August 29, 2019 byThe Sunday Morning No Comments
If you watched Taron Egerton kicking a** in a suit in Kingsman and thought “damn, that’s a sweet view”, you clearly agree that suits are the best outfit for men.

May 18, 2021 byNews Admin No Comments
France has a sizable Buddhist population comprising both Sri Lankan, French, and followers of other nationalities. The International Buddhist Centre in Le Bourget is one of the Buddhist temples cateri