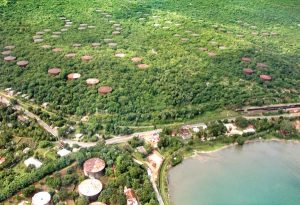 Even though the Indian Government has been critical about giving 25 fuel storage tanks in Trincomalee back to Sri Lanka, the new High Commissioner to India Gopal Bagley has been positive and has assured the Sri Lankan counterpart that the High Commission would hold discussions with the Lanka Indian Oil Corporation (LIOC), the lessee of the fuel storage tanks in Trincomalee, sources at the Ministry of Power and Energy told us.

According to sources, during a recent meeting with the Sri Lankan authorities on this matter, Bagley had stated that reclaiming the storage tanks is a case that should be dealt with by the companies that entered into a lease agreement on this subject and certainly not by the Indian Government as it does not have any direct involvement in the agreement.

The Trincomalee oil tanks, built by the British, had never been used to its full capacity after Independence in 1948. The farm initially had 101 tanks built with steel one inch think. Each tank could store 12,000 tonnes of fuel, bringing the total capacity of the tanks to 1.2 million.

After the British left the country, only 15 tanks were used by the Ceylon Petroleum Corporation (CPC) while the rest was taken over by the surrounding wilderness. Out of the 101 tanks, one was destroyed in an Air Force plane crash in the 1960s. In 2003, Sri Lanka leased the Trincomalee oil tanks to LIOC for 30 years, which expires in 2033.

The Sunday Morning Business reliably learnt that after the end of the lease agreement, Sri Lanka is not willing to renew the agreement as they want to develop the storage tanks for local purposes.

Reclaiming storage tanks in Trincomalee or commencing joint ventures with LIOC on Trincomalee oil tanks are long-pending requests made by Sri Lankan authorities from consecutive Indian Governments and the LIOC. Nevertheless, none of it progressed.

In 2017, then Minister of Petroleum Chandima Weerakkody initiated talks with LIOC, proposing a joint venture pertaining to 84 storage tanks in Trincomalee as LIOC uses only 15 tanks out of 99 existing tanks. Even though this proposal received the Cabinet of Ministers’ approval and was discussed with LIOC, it was abandoned subsequently.

The discussions have been renewed once again by the present Government as Sri Lanka had no methods to store fuel when there were negative international oil prices during the peak of the pandemic in the second quarter of the year. Therefore, the Government is looking for methods to ensure that they do not miss similar opportunities to store fuel at comparatively lower prices in the future.

Sources noted that the CPC managed to store fuel in two tanks with a capacity range of 20,000-25,000 tonnes in Jaffna and Puttalam during the peak of the global pandemic.

In addition to the plan of reclaiming the Trincomalee tanks, the Government is planning to build oil storage tanks in Hambantota. The Urban Development Authority (UDA) has been advised to look for a suitable land to establish the refinery. The subject Ministry is yet to decide on whether it would be a foreign direct investment (FDI), public-private partnership (PPP), or local investment.

Only 147 condominium units to be sold at Altair

April 18, 2021 byNews Admin No Comments
Altair, the luxury commercial development in Colombo has only about 147 condominium units remaining to be sold to the public, The Sunday Morning Business learnt.

April 6, 2022 byNews Admin No Comments
Nandalal Weerasinghe, a career central banker, was appointed to head Sri Lanka’s monetary authority as the Government seeks to pull the South Asian nation out of an economic tailspin, avoid a bond def