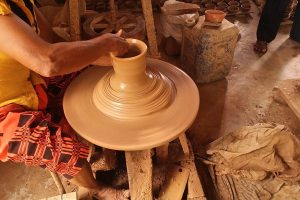 State Minister of Cane, Brass, Clay, Furniture, and Rural Industry Promotion Prasanna Ranaweera announced that he will look into introducing a receptacle made of clay and cane to replace the empty liquor bottles used to store water by offices, houses, and motor vehicle drivers.

Ranaweera announced the decision after accepting the proposal made by National Authority on Tobacco and Alcohol (NATA) Chairman Dr. Samadhi Rajapaksa to break the unpleasant habit of using empty liquor bottles at offices, houses, and cars to store potable water.

“By the turn of 2021, we plan to initiate this project and I will seek the approval of the Cabinet of Ministers to implement this proposed project,” Ranaweera noted, adding that he will request both the President and the Prime Minister at the next Parliamentary group meeting to grant approval for government offices to remove plastic items and replace them with receptacles made of clay, cane, and brass to store drinking water.

He noted that the intention behind the move was to popularise cane, clay, and brass cottage industries.

May 20, 2019 byEaswaran No Comments
Army Commander Lieutenant General Mahesh Senanayake appealed to parents to send their children to school saying their security will be assured.