Reports from US are in 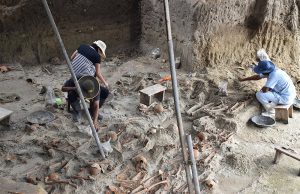 The reports on five of the six bone samples from the Mannar mass grave, sent to the US for radiocarbon dating tests, were received by Sri Lanka, and the reports will be submitted to court on Wednesday, an official said yesterday.

Of the remains unearthed from the Mannar mass grave, six samples were sent to the US for radiocarbon dating tests. Of these six samples, five conclusive reports were received by Friday night.

The reports on five of the six samples were received by the official in charge of the excavations, Senior Judicial Medical Officer and the Chief Investigating Officer Dr. Shaminda Rajapaksa.

Under the observation of the Office of Missing Persons (OMP), six human bone samples collected from the site of the mass grave were sent to Beta Analytic in Miami, Florida, US for radiocarbon dating tests.

Through the process of radiocarbon dating, officials will be able to determine the time period in which the deaths occurred, further enabling officials to answer questions of whether these remains were from a single or multiple time periods.

Dr. Rajapaksa said that the reports that were emailed to his office in the late hours of Friday (15) would be filed and presented to the Mannar Magistrate’s Court on Wednesday (20), while the report on the final sample was expected soon.

Over 1,000 suspects arrested during special operation in WP

An island for Covid burials

March 2, 2021 byNews Admin No Comments
The Government is set to allocate an island for the burial of Covid-19 victims’ bodies, following the issuance of the gazette notification permitting burial last Thursday (25).