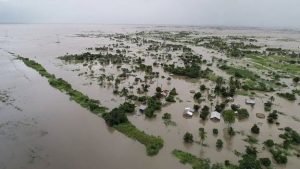 Aid agencies are scrambling to reach survivors of Cyclone Idai in Mozambique as the full scale of the disaster becomes clear.

Charities say thousands of people are stranded by catastrophic flooding, clinging to roofs or stuck in trees.

In the port city of Beira aid workers say they have only two to three days of clean water left.

About 300 people are confirmed dead in Mozambique and Zimbabwe, but the toll is expected to rise.

With shortages of food and clean drinking water the threat of disease is growing, medical agencies warn.

The powerful cyclone swept in to Beira last Thursday, with winds of more than 177 km/h (106 mph). It left a trail of devastation as it moved inland across Zimbabwe and Malawi.

“The first thing you see when you arrive is destruction and a lot of water,” said Get Verdonck, an emergency co-ordinator with the medical charity Médecins Sans Frontières (MSF).

“People are using well water with no chlorination, and that water is unlikely to be clean… pneumonia and other respiratory diseases are going to be a problem,” he told Reuters from Beira.

Aid groups said Mozambique had borne the brunt of flooding from rivers that flow downstream from neighbouring countries. At least 200 people are confirmed dead in the country but many areas have still not been reached.

Caroline Haga, an official with the International Federation of Red Cross and Red Crescent Societies, said the worst-hit areas were close to the Buzi river west of Beira.

She said rescue teams were dropping high-energy biscuits, water purification tablets and other supplies to people surrounded by water and mud.

“We have thousands of people… in roofs and trees waiting for rescue,” Haga told AFP news agency. (BBC)

US Capitol secured, woman dead after rioters stormed the halls of Congress to block Biden’s win

January 7, 2021 byLahiru Pothmulla No Comments
US Capitol is once again secured but a woman is dead after supporters of President Donald Trump breached one of the most iconic American buildings, CNN reported.

March 19, 2021 byNews Admin No Comments
Pakistan’s Army chief called on Thursday for arch rivals India and Pakistan to “bury the past” and move towards cooperation, an overture towards New Delhi that follows an unexpected joint ceasefire an