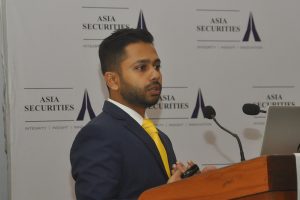 The Sri Lankan construction industry’s residential market is predicted to be one of the first sectors to pick up in 2020 after facing a few challenging years.
During the Asia Securities Wealth Insights Series: Construction Sector Outlook 2020 forum held on Thursday (20), it was stated that the residential market would benefit the most from the recent tax cuts.
“The residential market will benefit the most from the recent tax cuts and will be one of the first sectors to pick up, given its close relationship to consumer spending and higher disposable income,” said Asia Securities analyst Naveed Majeed, during his presentation at the event.
He explained that during the last few years the Greater Colombo Housing Approval Index showed a significant slowdown in the residential market. He attributed this to three main reasons; the first being the tight disposable income, which came following the implementation of the Inland Revenue Act, which saw an increase in taxes.
The second reason was the increase in the cost of construction, which again followed the implementation of the Inland Revenue Act and the depreciation of the rupee in the last few years.
“We saw corporates passing these cost down to consumers which led to a higher cost of construction,” said Majeed.
He stated that the third and most important reason for this slowdown was the pickup of interest rates following a tight monitory policy which was seen between 2016 and 2018.
“After this sharp increase in interest rates, we saw a significant slowdown in home loan demand in the years that followed.”
However according to Majeed, 2020 has seen these three factors reversed, due to the recent tax revisions and the Pay As You Earn (PAYE) tax threshold being increased, which is set to help disposable incomes. He went on to state that companies are also going to pass down the benefits of the reduction in Value-added Tax (VAT) and Nation Building Tax (NBT), which will provide relief to the cost of construction.
He explained that the most important change was the loose monitory policy which was implemented in 2019, that led to a fall in the interest rates. He went on to state that currently the home loan rates are roughly around 12%, which is similar to the ones seen in 2015 when the residential market was at its peak.
“This is still at about 1.2% fixed point price differential to the lowest level seen in 2014; yet we believe that these interest rates will be sufficient to drive loan demand in 2020. All in all, we are positive about the residential market in 2020; we will see it grow and we also expect the market to grow by 8% from 2019 to 2023.”
The year 2019 had also been a very challenging year for the apartment market according to Majeed; this was due to three reasons. The first reason had been the unfortunate events of the Easter Sunday attacks, followed by the imposition of 15% VAT on apartment sales, and lastly the presidential election which took place towards the end of the year.
He stated that the improved security levels and recent tax revisions, which have seen the removal of the 15% VAT on apartments, is believed to provide a conducive environment for apartment demand in 2020. Despite this, he explained that they do not believe the increased apartment demand will lead to demand for the construction of apartments.
“When looking at the inventory that is coming in 2020 and beyond in both the luxury and affordable segments, we see that a large amount of inventory is coming. This will result in a large supply in the market; so we developers are committing to large-scale investments until this supply is absorbed by the market.”
Speaking of the apartment sales in 2020 during a panel at the event, President of the property group at John Keells Holdings Suresh Rajendra, stated that they have already started to see a considerable pickup in sales, especially in the mid-tier market segment. 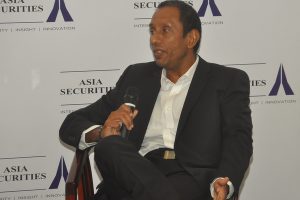 “The reduction of the VAT and abolishment of the NBT have worked well for us, and we have already seen a pickup, and expect the luxury sector to follow soon thereafter in the second half of this year.”
Despite having a poor 2019, Rajendra stated that the need for housing is always constant; given the current population growth and migration to the cities which can be seen happening nonstop. He explained that there is a pent-up demand for housing that is ready to burst, and at its peak, the apartment sector will sell about 1,500 to 2,000 apartments a year.
Construction sub-sectors
In his presentation, Majeed spoke on the construction sub-sectors such as cement, aluminum, tiles, and cables, and their outlook for 2020.
He stated that they see cement to be the first sub-sector to pick up in 2020, because it is one of the key raw materials that go into construction; therefore when the construction industry picks up, so will the cement sub-sector.
“We expect the cement market to grow at an average of 5.2% from 2019 to 2023, and this falls in line with our GDP expectation of five to five and a half in the medium term.”
He also pointed out that in 2019 the cement industry only sold 6.3 million metric tonnes which was lower than the 6.7 million metric tonnes sold in 2018. The current capacity for cement in Sri Lanka is 9 million metric tonnes, and 2020 is expected to add a 900,000 metric tonne bagging plant and 800,000 metric tonne bagging plant, by the involvement of two new players in the market.
“Overall, we are seeing a total of 4.5 million metric tonnes being added between the years of 2019 to 2022. So in our view, with this amount of supply coming in, we expect the cement industry to be in medium supply in the medium term.”
Moving on to the aluminum sector, Majeed stated that they see the demand growing by 5% from 2019 to 2023. He also went on to state that the key risk for aluminum comes from the higher priced aluminum which will be a deterrent to lower-income house builders, especially outside of the Colombo area, with timber continuing to be a substitute.
He explained the larger concern for them is the capacity, with 2017 having three extrusion manufacturers, with a total combined capacity of 36,000 metric tonnes per annum. The year 2019 has seen the addition of another extrusion manufacturer, increasing the total to 42,000 metric tonnes per annum; however the industry demand in 2019 has only been 12,000 metric tonnes per annum.
“There is a very large mismatch in terms of supply and demand when it comes to aluminum. We do not see the current capacity being absorbed by the market any time soon, so we expect to see low utilisation rates for the aluminum extrusion manufacturers. So it’s important that these manufacturers look at an export strategy for them to increase utilisation rates.”
Speaking about the tile sector, Majeed stated that the tile sector is benefiting the most, out of the residential growth. In the past few years, about 90% of the tile sector sales have come from residential demand, so he stated that they are expecting the sector to receive a growth of 8% going in line with their expectation for the residential market.
Majeed pointed out that with regard to the market share, there has been a significant drop in volume sold, from 26 million in 2017 to 16 million in 2019. He explained that pricing was not the issue seen in the tile market, as cheap imports, which is one the largest threats in the tile industry, fell from 60% to 48.5% of the market. Instead, he stated that the overall slowdown in demand was to be blamed.
“In 2020, we do expect a pickup in volumes sold in the tile industry, and we think that imports will also increase in this period.”
Lastly looking at the cable sector, Majeed stated that this is another sector they are positive about; due to 60% of the sales being from the dealer market, which is exposed to the residential market. Another 20% of sales for the sector come from the Ceylon Electricity Board (CEB), which is looking to source their cables locally.
Majeed’s presentations also showed that 2019 was a tough year for the construction sector as a whole; however he stated that the two tax cuts following the November 2019 elections, the reduction of the VAT and removal of NBT, and the reduction in the corporate tax rates favoured the construction sector’s outlook. He went on to explain that despite this, the sector saw soft interest in construction that led to a weakening of prices.
Sri Lanka’s Gross Domestic Product (GDP) was Rs. 14,449 billion in 2018, of which the construction sector’s contribution was approximately Rs. 1,083 billion, according to the Chamber of Construction Industry (CCI). The total debt from the construction sector to private and state banks stands at 20% of their contribution to GDP, which is over Rs. 216 billion.

CAA yet to decide on a further gas price hike

August 29, 2021 byNews Admin No Comments
The Consumer Affairs Authority (CAA) is yet to arrive at a decision on whether to further increase the price of Laugfs’ gas cylinders, with the company sending continuous letters to the Authority poin

February 21, 2022 byNews Admin No Comments
On 9 February 2022, Fintrex Finance proudly celebrated its 10th year anniversary. Fintrex Finance, which has been growing rapidly in a short span of time, shared this proud moment with their staff mem