The dilapidated paper factory in Valaichchenai got a new lease of life this year and is off to a promising start with the first batch of craft paper introduced to the market in July.

Up until the early 90s, the products from this paper mill were circulated locally, with products ranging from 50 GSM paper to 500 GSM boards.

Established in 1955, the paper factory was commissioned for commercial operation in 1956 under the name “Valaichchenai Paper Mill”. In 1958, the corporation was renamed as “Eastern Paper Mills Corporation” with its board machine commissioned in 1972.

The open economy followed by the Civil War resulted in the factory’s downfall which commenced in 1994, where it was incurring heavy losses, and eventually brought the factory’s operation to a halt in 2016. The factory equipment, meanwhile, was to be sold in an auction for scrap metal as many governments failed to restore it.

However, in February 2020, under the directives of President Gotabaya Rajapaksa, Minister of Industries Wimal Weerawansa appointed a new chairman and board to oversee the feasibility of restoring the factory with minimum expenses.

The factory is now partly restored with the assistance of the Sri Lanka Army and Sri Lanka Navy, along with the consultation of their retired technical officers.

During The Sunday Morning’s visit to the Eastern Province in July, we dropped by at the factory premises to have a peek at the factory which was supposedly being gradually restored.

We initially made our way directly towards the Kadadsi Nagar Railway Station where there was a blocked side entrance to the factory ground. While one railroad was used for the daily commuter trains, there was another loop railway line which was in bad shape and would have taken the goods train to the paper factory in the years that it was fully functional.

We spoke to Leo, a railway supervisor who was at the station, to get the proper directions to the factory as well as some background information on the area and how the railway station was of use to the paper factory back in the day.

“When the factory was functioning, most of the people who worked at the factory would use our railway station for commuting. Today, only three or four people who work for the (Ceylon) Electricity Board (CEB) and people from the Department of Railways use this station,” Leo explained.

“We are glad that the current Government is restoring this factory which is going to open up many job opportunities to the people from this area and the outskirts as well. In return, it will also improve the quality of life of the people in Kadadasi Nagar,” he noted.

Our initial need to visit the factory was to take a peek at the place and possibly photograph the facade of the land. From the main gate, we drove in towards the administrative office and were greeted by a monument that was erected at the time the factory was established. Two giant metal paper spools stood in the centre of the land with a granite tablet affixed to it, detailing the 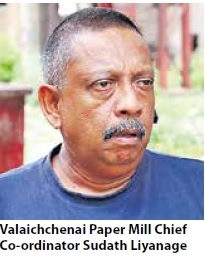 commencement of the operations of this once flourishing industry, of which the backdrop was the two-storey building which houses all the administrative staff for the factory.

Valaichchenai Paper Mill Chief Co-ordinator Sudath Liyanage was about to leave as we stepped into the office and was kind enough to take The Sunday Morning news team on a familiarisation tour of the factory which had gradually been restored by the assistance of the Sri Lanka Navy and the Sri Lanka Army. We were also joined by S. Sivaharan, a former employee of the paper factory, who had been asked to report to work to provide guidance to restart the operations of the factory.

Pointing at the dilapidated buildings that we were passing, Liyanage noted that not all of it will be restored, adding that instead they will be preserved as historic ruins which will tell the story of the previous factory.

“At the moment, we are using the main processing building. The Navy was able to fix the electrical circuits and the engineering division from the Army is assisting in the restoration of the mechanical work under the supervision of the retirees who have been called back,” Liyanage explained.

On our way towards the main processing building, about four people were tumbling a stack of cardboard boxes which were loaded on to a pulley. We were told that all the cardboard collected from the recycling centres are now being brought to the factory to be repurposed as pulp which will later be converted to craft paper and boards. 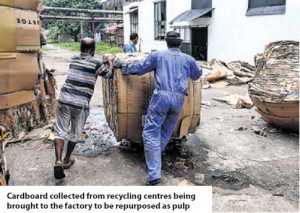 “The factory has its own power station as the process requires a lot of energy; it also has a steam engine which was fuelled by furnace oil. But since we are attempting to restore the functions of this factory with a minimum cost, we have bypassed this stage and are using our furnaces to burn the firewood supplied from the eucalyptus forest maintained within the factory premises,” Liyanage elaborated.

As we made our way to the next building, we were engulfed in somewhat humid constitutions, and Sivaharan explained that this was due to steam being supplied from the furnaces through the motors to the pulp-making process. The pulping process requires three components: Cardboard/pulp material, steam, and water.

Progressing towards the floor above, we witnessed several vats that were churning pulp as workers continued to add waste cardboard to them where water is continuously pumped. The pulp mixture is then pumped to the next floor where it goes through a conveyor belt that pours the pulp solution flat, for which the gauge is set based on whether it is a paper product or a board product.

The wet paper is instantly turned into dry paper, and at the end of the machine, there is a metal spool that keeps rotating to catch the finished product. It is from this metal spool that the product is cut at a cutting station.

“At present, the output of the factory stands at 20 MT per day. Hopefully, it will reach 70 MT of product by the end of this year, as the rest of the machinery will be up and running. In July, we released stocks of craft paper that is used for paper bags and to make envelopes to the market, and it is only being issued to the Co-operative Association on a wholesale basis,” National Paper Company Ltd. (NPCL) Chairman K.A.W. Rupasinghe told The Sunday Morning.

According to Rupasinghe, once the rest of the factory commences its production work, the country can expect to have 100% of its paper and board requirements fulfilled by NPCL’s Valaichchenai Paper Mill.

He added that there are a few more areas that need fixing, after which the company is looking to have an official opening ceremony in the presence of the President, the Prime Minister, the Minister for Industries, and its staff.

May 16, 2021 byNews Admin No Comments
The decision by Sri Lanka Podujana Peramuna (SLPP) National Organiser Basil Rajapaksa to leave for the US in what seems like a sudden move, has sparked much discussion over the possible reason behind

January 22, 2022 byNews Admin No Comments
With the Central Bank of Sri Lanka (CBSL) printing close upon one-and-a-half trillion rupees in the last year alone, experts have opined that this approach has done more harm than good to the country’