Results of development programmes expected in next five years: PM 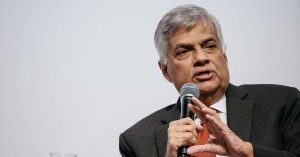 Results of the development programmes of the present government are expected in the next five years Prime Minister  Ranil Wickremesinghe said.

Wickremesinghe was speaking to UNP organizers at the UNP Headquarters in Sirikotha today.

He said the UNP could rule for another 20 years based on the results of the programmes implemented during the present regime.

“We were questioned as to what we have done. We have achieved developed in many sectors under a Democratic rule,” Wickremesinghe stressed.

“The current government has spent the most for education and Health sectors in comparison to regimes in the past,” he said.

He said housing development has progressed throughout the country under the leadership of Minister of Housing Sajith Premadasa.

Wickremesinghe noted that considerable progress has been made in the country’s infrastructure.  “We cant count the number of roads we have made,”he said.

He went on to say that the government no longer sees Hambantota as a problem anymore.

“We have made plans to develop infrastructure and create economic zones in Hambantota. The results of these programmes are expected in the coming years,” he said.

December 20, 2021 byRuwani Fonseka No Comments
Responding to a question posed by a journalist regarding the current economic crisis in the country, the lack of essential goods and the foreign travels by Members of Parliament, State Minister of Edu

May 10, 2022 byRuwani Fonseka No Comments
Imaduwa Pradeshiya Sabha chairman Sarath Kumara has been reported dead following an attack on his residence last night.

This was made known by the Police Media today (10).