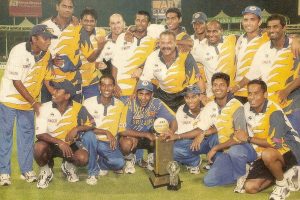 The victorious SL team with the ARY Gold Cup

Sri Lanka astonished a sell-out crowd by overwhelming in-form Pakistan.
If less comprehensive than when they beat India by 245 runs in their previous Sharjah final, in October, it was nevertheless a convincing victory.
Their 297, the tournament’s highest total, was anchored by Marvan Atapattu, who shared hundred stands with Sanath Jayasuriya, and Mahela Jayawardene, each of whom hit three sixes.

All of them benefited from dropped catches, while Pakistan were also profligate with wides.

The last ten overs brought 100 runs, and in addition saw Saqlain Mushtaq claim three wickets to reach 250 in only 138 one-day internationals, fewer than anyone else had needed.

Humayun Farhat and Saeed Anwar fought back, adding 69 in eight overs, and Pakistan were well ahead of the asking-rate after 15 overs, with 108.

By then, however, they had only four wickets left. Tail-enders Shoaib Malik and Waqar Younis saw them past 200, but once Muttiah Muralitharan removed them, the innings subsided with eight overs to spare.

Man of the Match: Marvan Atapattu

June 11, 2021 byRevatha No Comments
Some major happenings of the day in sports