Rise of the fall armyworm

December 6, 2020 by Sarah Hannan No Comments

Maize farmers from the Uva and Eastern Provinces have reported that their cultivations have been destroyed by the fall army-worm during the Yala season.

Farmers in affected regions noted that they applied the pesticides as instructed by the agriculture development officer, but there was no effect on preventing the pest attacks caused by the fall armyworm.

According to farmers, while at least 30 acres of maize cultivation in Matigahatenna, Passara have been destroyed by the fall armyworm, it is said to have now migrated to Lahugala in the Ampara District.

While the full extent of damage caused by the fall armyworm is still being calculated, the Department of Agriculture, when contacted by The Sunday Morning, noted that farmers had not followed the full instructions that were given to them.

“We instructed them to follow an integrated method, which involves biological methods, some pesticide application, and then human intervention. However, they always look for the easy way out and go ahead spraying the entire cultivation with pesticides, which hinders the process of controlling the fall armyworm from further destroying the crops,” Horticultural Crop Research and Development Institute (HORDI) Principal Scientist Entomology Senani Weligamage told The Sunday Morning.

Weligamage noted that after the first incident of fall armyworm attacks on crops were reported in 2018, HORDI, along with their affiliated university agriculture faculties, conducted research in a plantation located in Hasalaka during the 2019/20 Maha season.

For research purposes, the team of scientists had planted 100 maize plants in a test area and later randomly picked 25 for observation.

“We counted the number of predators that would prey on caterpillars in these plants on five occasions, testing every two weeks from two to 10 weeks of age. The team identified that there were natural predators that feed off the fall armyworms in different stages. They ranged from bugs to birds that are naturally found in our environment, and what we also observed was that when farmers spray pesticides over the entire cultivation, most of these predators do not visit them to destroy the fall armyworm,” Weligamage explained. 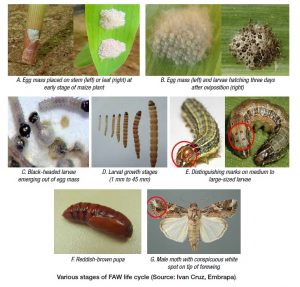 d out that the downside to spraying pesticides, especially for maize, is that the eggs that are laid amid the foliage would not get affected. Most often, farmers start to notice the infestation when it hits the larval and pupal stage, which is often too late for pesticides. Weligamage, therefore, suggested that several other steps too need to be followed to successfully eradicate the fall armyworm.

The recommended method of control is setting up pheromone traps that will trap the adult male moths, scouting the field to monitor the maize growth stages, and looking out for signs of fall armyworm egg-hatch and feeding through early-instar larvae, rather than looking for the small fall armyworm larvae.

In addition to that, farmers could choose insecticides that are not toxic to beneficial insects. For example, maize pollen can attract honeybees. Therefore, farmers can consider applying insecticides late in the day just before dusk, when honeybees and other pollinators have returned to their hives.

While removing the eggs and larva of the fall armyworm by hand sounds labour-intensive, it could work well if the cultivation is small; farmers could search for egg clusters in the field and crush them with their fingers. They may also search for larvae that can be fed to chickens.

When asked whether the crop damage is far less than it was in the 2018/2019 period, Weligamage stated that while the fall armyworm will not be completely eradicated in Sri Lanka any time soon, when the integrated method of control is applied, its population can be considerably reduced. 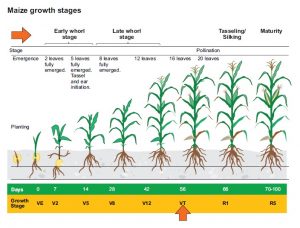 “When the pest was introduced to Sri Lanka, the methods of control were not immediately clear. But with continued awareness sessions and demonstrations that are carried out by our agrarian officers, this time we have reduced the damage considerably. Moreover, understanding the moths’ migratory pattern, we have also advised farmers to reduce the amount of maize that they cultivate, especially after the months of August-January, as that is the period where the fall armyworm tends to increase its population considerably, given the weather patterns,” Weligamage noted.

Meanwhile, to understand the magnitude of the fall armyworm infestation, the Sabaragamuwa Provincial Department of Agriculture had carried out a survey between January and March 2019 in 13 maize-growing agriculture instructor areas in the Ratnapura District and evaluated the severity.

The observations had returned that there was no evidence of pest occurrence in other crops, apart from maize. Moreover, even in mixed cropping systems with a small number of maize plants, heavy infestation was recorded only in maize.

While the amount of land extent used for maize cultivation in the Ratnapura District is estimated at 292.65 ha, only about 32.95 ha (11.3%) were infected by the fall armyworm.

Throughout the study period, attention was given by the research team to minimise livelihood damage by conducting interactive awareness programmes, which were directed towards the proper identification and further control of the spread of the pest.

Native to the Americas, the fall armyworm (Spodoptera frugiperda [JE Smith]; Lepidoptera, Noctuidae) was first reported in the African continent in January 2016 (Goergen et al. 2016). Subsequent investigations have revealed the pest in nearly all of sub-Saharan Africa (SSA), where it is causing extensive damage, especially to maize fields and to a lesser degree to sorghum and other crops. Currently, over 30 countries have identified the pest within their borders, including the island countries of Cape Verde, Madagascar, São Tomé and Príncipe, and Seychelles.

The fall armyworm consumes many different crops. It is capable of feeding on over 80 different crop species, making it one of the most damaging crop pests. While it has a preference for maize, the main staple of SSA, it can also affect many other major crops such as sorghum, rice, sugarcane, cabbage, beet, groundnut, soybean, onion, cotton, pasture grasses, millets, tomato, potato, and cotton.

The fall armyworm spreads quickly across large geographic areas. Like other moths in the genus Spodoptera, fall armyworm moths have both a migratory habit and a more localised dispersal habit. In the migratory habit, moths can migrate over 500 km before oviposition. When the wind pattern is right, moths can move much larger distances; for example, a flight of 1,600 km from the southern US State of Mississippi to southern Canada in 30 hours has been recorded (Rose et al. 1975).

Moreover, the pest can persist throughout the year. In most areas of North America, the fall armyworm arrives seasonally and then dies out in cold winter months, but in much of Africa, the pest generation will be continuous throughout the year wherever host plants are available, including off-season and irrigated crops, and when climatic conditions are favourable.

January 19, 2020 bySarah Hannan No Comments
Just two weeks into the new school term, some schools, especially in the Western Province, are yet to receive textbooks and school uniform vouchers for the academic year 2020.

January 3, 2021 bySarah Hannan No Comments
Over the last two weeks, when MPs were conducting their political meetings in their respective constituencies, they also made it a point to visit the maize fields that have been destroyed by FAW