A searing 57 off 40 balls from the 18-year-old Jemimah Rodrigues propelled India to comfortable five-wicket victory in the third T20I in Colombo on Saturday, 22 September, as they ran down their target of 132 with eight balls to spare. India’s discipline with the ball, and a tight fielding effort, had helped set the vctory up, as even the set Sri Lanka batsmen routinely failed to clear the field with their more expansive strokes. Seamer Arundhati Reddy was particularly impressive for India. She struck in her second over, and went on to finish with figures of 2 for 19 from her four overs. India now have an unassailable 2-0 lead in the T20I series, with two matches to play. They had won the ODI series 2-1. 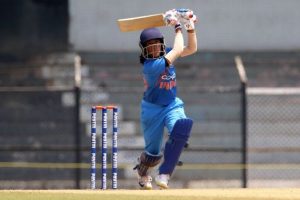 The visitors lost Smriti Mandhana early in the chase, and would also see Mithali Raj depart soon after the Powerplay ended, but despite having two senior players back in the pavilion Rodrigues continued to make clinical attacks – her first boundary a commanding six down the ground off just the third delivery she faced. Rodrigues’ only error was on 19, when she ran down the pitch at left-arm spinner Sugandika Kumari, and should have been stumped had wicketkeeper Dilani Manodara collected cleanly. She regouped after that reprieve, and picked up frequent singles in between the big shots, often dropping the ball into the infield to scamper through.

Rodrigues’ 53-run fourth-wicket stand with captain Harmanpreet Kaur – who made 24 off 19 deliveries – formed the spine of India’s reply. Rodrigues was caught at deep square leg with 19 runs still to get, but she had batted so aggressively towards the end of her innings, reaching her half-century with a dismissive six over square leg, that India had 25 deliveries in which to get the remaining 19 runs. This was Rodrigues’ second half-century in T20Is, the first having come against Australia in March. It was also her best score in international cricket.

“I was just looking to build a partnership with whoever was at the other end,” said Rodrigues after the match. “Today’s wicket wasn’t such an easy wicket to bat on – it was on the slower side. It’s always good to get a personal best score, but I know I should have finished it off today – there were hardly 20 runs to get. But the innings has boosted my confidence a lot.”

Sri Lanka pressed hard in the final overs, but could not prevent Veda Krishnamurthy and Anuja Patil from unfussily knocking off the remaining runs. Captain Chamari Atapattu, who had Rodrigues and Harmanpreet both caught in the deep in the same over, finished with Sri Lanka’s best figures of 2 for 29 – though other bowlers were more economical.

Earlier, Sri Lanka’s innings had been prodded forward at first by Atapattu, who made 28 off 32 balls, then later by Shashikala Siriwardene, who made 35 off 32, and Nilakshi de Silva, who struck 31 off 20. At no stage, however, were Sri Lanka able to mount a dangerous partnership. Although Harmanpreet often deployed 6-3 fields, Sri Lanka’s batsmen were unable to successfully target the open side of the ground. At times their attempts to hit across the line to those areas also produced wicket chances.

Aside from her excellent bowling with the new ball in particular, Reddy was also good in the field. She made one especially impressive save at the long-off boundary, and also played a part in running out two Sri Lanka batsmen, as the opposition limped to 131 for 8.

October 28, 2021 byRevatha No Comments
Theekshana to strengthen SL in today’s match against Australia

July 20, 2021 byRevatha No Comments
Major sports happenings on 19 July, over the years