* Stars like Ronaldo, with 550m social media followers, are beyond the control of sport sponsors

Cristiano Ronaldo’s decision to remove two Coca-Cola bottles from view at a press conference, and dent the value of the fizzy drink maker’s sponsorship of the European Championship, has highlighted the risks brands face by associating with sports stars who are made powerful by the social media era.

The Portugal Captain, a renowned health fanatic who eschews carbonated drinks and alcohol, underlined his point by holding a bottle of water while saying “agua”, Portuguese and Spanish word for water. The water brand in question happened to be owned by Coca-Cola too, but the damage was done. 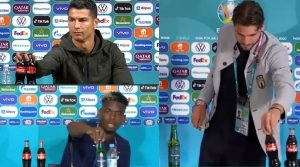 The anti-fizzy-drinks protests during the ongoing Euro 2020 tournament by (clockwise) Cristiano Ronaldo, Paul Pogba, and Manuel Locatelli last week have raised doubts whether global sports stars have overtaken the influence of global commercial brands in the age of social media

The Guardian in England raised this issue as at least two more Euro 2020 players followed Ronaldo’s “ante-coke press-conference protest” this week while some others openly endorsed the product at the subsequent Euro press conferences probably as a counteraction to Ronaldo’s.

Most significantly, Ronaldo’s act has created a global discussion on the subjects of sports icons endorsing dubious consumer products, particularly food items, and the moral and legal side of such protests, as well as the power of social media that these sport icons make use of, so as to undermine, in a way, their own sponsors.

“It’s obviously a big moment for any brand when the world’s most followed footballer on social media does something like that,” a sports marketing consultant Tim Crow, who advised Coca-Cola on football sponsorship for two decades, has told The Guardian on Friday (18).

“Coke pays tens of millions (of US dollars) to be a UEFA (Union of European Football Associations) sponsor and as part of that, there are contractual obligations for federations and teams, including taking part in press conferences with logos and products. But there are always risks,” Crow has added.

Major brands have never been able to control the actions of their star signings. Nike decided, stoically, to stand by Tiger Woods as the golfing prodigy lost sponsors including Gillette and Gatorade after a 2009 sex scandal, remembered The Guardian.

“However, Ronaldo’s public snub signifies a different kind of threat to the once-cosy commercial balance of power between stars and brands, one born of the social media era. Ronaldo is right at the top of social media earners,” PR expert Mark Borkowski has said.

“It is about the rise of the personal brand, the personal channel. It gives so much bloody power. That’s what has allowed Ronaldo to make a point (about a healthy lifestyle).”

Now 36, the world’s most famous footballer has built an empire that has seen him make more than $ 1 billion (Rs. 198 b) in football salaries, bonuses, and commercial activities such as sponsorships. What is crucial is the global platform that the social media has offered Ronaldo.

He has half a billion followers on Instagram, Twitter, and Facebook which has freed him from following the commercial rules of clubs, tournaments, and their sponsors.

He is the highest earner on Instagram, commanding $1 million per paid post (Rs. 198 m). With more than $ 40 million (Rs. 7.9 b) in income from the social media platform alone annually, Ronaldo makes from Instagram more than what he earns from his club Juventus.

“People are saying this is about athlete activism and there is some truth to that,” says Crow. “Athletes are taking a more activist view, we are seeing that, most recently in press conferences. And we will see it again.”

On Tuesday (15), France midfielder Paul Pogba, a practising Muslim, removed a bottle of Euro 2020 sponsor Heineken’s non-alcoholic 0.0 brand from the press conference table when he sat down to speak to the media after his team’s 1-0 win over Germany.

Three years ago, he was one of a group of Manchester United stars who boycotted a contractual event for sponsors to protest at the club’s poor travel arrangements that had affected Champions League games.

Then on Wednesday (16), Italian midfielder Manuel Locatelli copied Ronaldo in a press conference and removed two coke bottles from table following his Man-of-the-Match feat in Italy’s 3-0 victory over Switzerland.

Osaka’s pulling out from French Open

Crow says the most important example of athlete activism came last month when Naomi Osaka, the No. 2-ranked female tennis player, pulled out of the French Open after being fined $ 15,000 (Rs. 2.9 m) and threatened with expulsion by organisers for saying she would skip contractual media obligations because of the effect on her mental health.

Osaka, who has more than 4 million social media followers, used Twitter to explain her “huge waves of anxiety” and the “outdated rules” governing players and media conferences, while announcing that she was pulling out of Roland Garros.

“Activism is now on every sponsor’s radar,” says Crow, who believes Ronaldo’s move could mark the beginning of the end of product-placement-laden press conferences.

“My view is that, for a long time, now having sponsors’ products on the table in front of athletes in press conferences looks outdated and inauthentic and it’s time to retire it,” he says.

“This incident highlights that fact. Many of my sponsor clients have mentioned this in the past, particularly those targeting younger consumers. It’s not as if sponsors don’t have enough branding throughout tournaments and events anyway.”

November 8, 2018 byRevatha No Comments
Thus SL Women lost both their warm-up games conducted before the tournament proper starting on Friday.