Rory Burns will be given the chance to succeed Alastair Cook at the top of England’s Test batting order, after being named alongside two other uncapped players, Olly Stone and Joe Denly, in a 16-man Test squad for the tour of Sri Lanka in November.

Burns, who has been the stand-out batsman on the county circuit this summer, has been rewarded for his haul of 1319 runs at 69 in Surrey’s triumphant run to the County Championship title – a run that might have included ten wins in a row but for high winds forcing an abandonment of their latest contest at Somerset this morning. 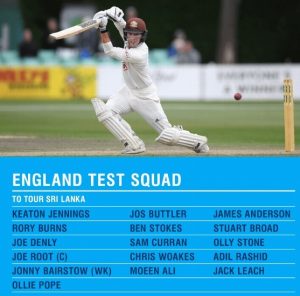 It is the fifth season running that he has passed 1000 runs in first-class cricket, and Ed Smith, England’s national selector, said that – at the age of 28 – he had made an unanswerable case for selection.

“I think Rory Burns has impressed everyone with the consistency of his run-scoring, not just this year when he’s scored over 1300 runs and led Surrey to the title – which are both significant achievements. It hasn’t been easy to bat this summer, as we all know, but over five years he has consistently scored over 1000 runs in this slightly truncated season. He really deserves this opportunity in the England Test squad.”

Burns is likely to open in the first Test at Galle alongside Keaton Jennings, who has been retained in spite of a top score in six Tests this summer of 42. And though Jennings will travel knowing that he is running out of chances at the highest level, Smith was adamant that – in a season in which runs were hard to come by for every Test opener on show – he had not performed significantly worse than anyone else on show.

“Going into The Oval Test, if you take England, Pakistan and India together, their opening bats averaged 20, which is exactly where Keaton averaged, or a notch different [192 runs at 19.20],” said Smith. “He conforms to the average.

“We are here talking about how are you going to replace Alastair Cook and what a hole he leaves – it’s a wonderful career and deserves every superlative going – but he didn’t find opening the batting in England in 2018 very easy. [India’s] Murali Vijay is a very assured Test-match opener and he watched the last three games on TV, he lasted four innings.

“Like every opening batsman this summer, Keaton Jennings found opening the batting difficult. There’s no secret about that, but when it comes to selecting a touring party, we felt Keaton Jennings was in our best squad to beat Sri Lanka.

“Looking at capabilities and track record, he has a Test-match hundred in Mumbai when the ball spun extravagantly. He can draw on that. He has come through a really tough summer and sometimes in international sport getting through something difficult can put you in good stead.”

Although Smith said that England’s squad had been selected on the assumption that Moeen Ali would start the series at No.3, the 32-year-old Denly could be given an early chance to press for a top-order berth, after Smith praised his maturity on his return to international recognition after a nine-year hiatus, following nine ODIs and five T20s up until February 2010.

Denly could also offer further bowling options with his legspin, a mode of attack that could prove useful on Sri Lanka’s turning wickets.

“I played with Joe Denly [at Kent] when he was a very young man,” said Smith. “You could see he was a fantastic natural athlete, a brilliant mover, a talented batter, he bowled leg spin, everything came very easily to him.

“What’s happened to Joe is he’s evolved into this really calm, measured performer but that touch of class is still there, it’s in his DNA.

“I think with players who get opportunities late in their careers, you just want to know that touch of class is there, and there definitely is with him. So that counts in his favour.”

The other stand-out selection is that of the 24-year-old Stone, who was named earlier this week in the ODI squad, but is set to press for his place in the Test squad as well after impressing with his 37 wickets at 12.17 for Warwickshire this season. Stone’s director of cricket at Edgbaston, Ashley Giles, warned that England need to treat his young quick like a “Ferrari” as he makes his way in international cricket, but he is set to be blooded in an unforgiving environment.

“I spoke to Ashley just on the way in now and have been in regular contact with him throughout the summer,” said Smith. “It’s been really good to have that communication with him.

“Obviously Olly Stone is a very exciting talent and he has been troubled by injuries, there’s no secret there. We want to catch him when he’s at his best, when he’s in form, bowling fast bowling accurately, with skill, but also manage his workload so he doesn’t get injured.

“There’s always a risk with any fast bowler, injuries can happen. If you want to take no risks, you never select anyone for anything. However, we believe there’s a way of managing his workload so we can get the best out of him without exposing him to unnecessary risks.

“But in Olly’s case he’s quick and he’s getting his wickets at 12 and his strike rate is 22. It’s a bonus the fact he’s got that pace. He’s not there just because he’s fast, he’s there because he’s doing a really good job and obviously it’s a great asset he has that extra pace as well.”

Despite speculation about whether James Anderson and/or Stuart Broad would be rested for the Sri Lanka tour, Smith named both of England’s veteran quicks in his tour party, and justified that decision by looking at what is a relatively manageable Test itinerary between now and England’s home Ashes campaign in 2019.

“If you look at the make-up of the Test schedule we’ve got these three Tests in Sri Lanka, three in West Indies in the new year and then a long break when the World Cup will be played. Workloads are manageable and Stuart and Jimmy were both keen to play. Moving forward at some stage there will be some need for succession planning, however in this instance we felt it was perfectly manageable for them to play these three Tests.”

Somerset’s Jack Leach, who impressed on debut in New Zealand in March, was recalled as the third spinner, behind Adil Rashid and Moeen Ali, after missing out this summer due to a broken thumb ahead of the Pakistan series in May.

Ollie Pope, Burns’ 20-year-old Surrey team-mate, was included among the spare batsmen, after making his debut in the Lord’s Test against India before losing his spot in the wake of England’s heavy defeat in the third Test at Trent Bridge. He slots into the squad ahead of James Vince, who had been touted for a possible recall after a season of heavy run-scoring for Hampshire.

August 21, 2018 byRevatha No Comments
A boy from a background of enormous hardships wins world silver at Muay Thai.

December 27, 2018 byRevatha No Comments
The ICC ACU officials have handed over a report to the new Sports Minister in Dubai.