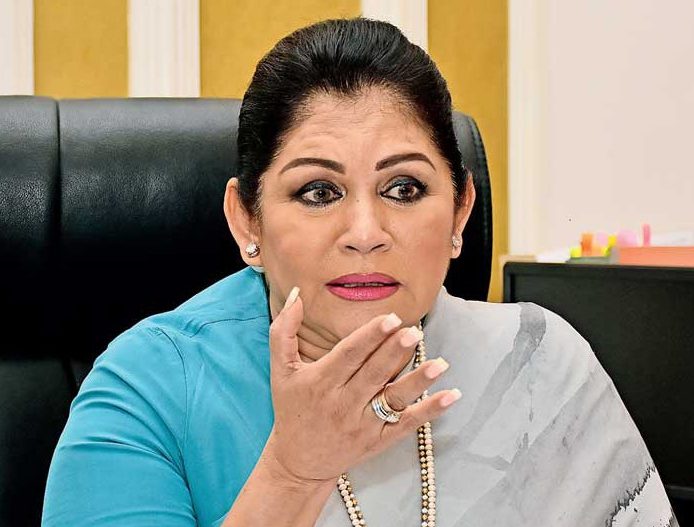 With vaccination against Covid-19 in the public phase, individuals have been influencing health workers at vaccination centres to have the vaccine administered to them disregarding priority lists and prior registrations, with a so-called “Rosy Madam’s list” coming in for particular criticism.


It was alleged through social media yesterday (22) that those who went to vaccinate themselves at the vaccination centre at the Colombo Public Library were told that the vaccines would be administered only for those in “Rosy Madam’s list”, a reference to Colombo Mayoress Rosy Senanayake.


However, upon inquiry, The Morning learnt from Senanayake’s Media Secretary Tharaka Weerasooriya that the Mayoress had visited this particular vaccination centre following these reports and instructed the health workers not to vaccinate anyone who has tried to use her name to influence the vaccination programme and not to bypass the Government’s priority list for any reason.


Speaking to The Morning yesterday, Deputy Director General of Health Services Dr. Hemantha Herath confirmed that health workers are being influenced to vaccinate outside of the provided priority lists. He requested the public and individuals to refrain from imposing such pressure on health workers.


“It has come to our attention that certain individuals have influenced and demanded that they be vaccinated outside of the priority lists. We request the public not to impose such pressure on health workers administering the vaccine and ask them to be patient till their turn comes to be vaccinated.”


Dr. Herath said that the Police have not been involved in dealing with such situations as that might create tense situations within vaccination centres. He said that those who are between the ages of 30 and 59 from identified high-risk areas have been notified by their relevant Medical Officers of Health (MOH) to come to the relevant centres and receive their vaccination within a period of three days. He emphasised that clear instructions have been given to healthcare workers not to vaccinate anyone outside the provided priority lists.


Releasing a statement to the press yesterday, the College of Community Physicians noted that the vaccine prioritisation of the Ministry of Health has deviated from the original plan.


“The decision of the Ministry of Health to initiate vaccination targeting individuals of 30 to 60 years was implemented in a few selected communities and this is a clear deviation from the scientifically agreed prioritisation stated in the National Vaccine Deployment Plan. This strategy is neither an evidence-based practice, nor a public health decision considering the wider public health and economic outcomes.”


The College requested the Government to urgently implement “the scientifically recommended vaccine priority list rather than taking ad hoc decisions on the vaccination policy”.


Responding to questions posed by The Morning yesterday, Ministry of Health Epidemiology Unit Consultant Epidemiologist Dr. Deepa Gamage said that the current vaccination plan is not ad hoc and that it is a plan by the Ministry of Health. “The vaccination programme in practice is not ad hoc at all. It is the Ministry’s plan and we are implementing it.”


Meanwhile, The Morning learnt from Ministry of Health sources that the initially announced priority list of vaccinating individuals above the age of 60 after vaccinating frontline workers was subject to change.


“As the Ministry submitted the application for the Global Alliance for Vaccines and Immunisations (GAVI) COVAX Facility, a comment was added to the application stating that the order of priority may change according to the prevailing pandemic situation.”


Sources further said that a decision was made to vaccinate those between the ages of 30 and 59 due to the high transmission rate among individuals of this age group as studies have shown that the vaccination is able to control the transmission of the virus to a certain degree.


Meanwhile, National Operations Centre for the Prevention of the Covid-19 Outbreak (NOCPCO) Head General Shavendra Silva said yesterday that 175,694 frontline workers and 100,262 persons in high-risk areas in the Western Province have been vaccinated against Covid-19 so far.


Kolonnawa, Gothatuwa, Moratuwa, Egodauyana, Hanwella, and Pita Kotte were considered high-risk areas in the Colombo District due to more patients being reported from these areas. Attanagalla, Biyagama, Divulapitiya, Dompe, Gampaha, Ja Ela, Katana, Kelaniya, Mahara, Mirigama, Minuwangoda, Negombo, Ragama, Seeduwa, and Wattala are high-risk areas in the Gampaha District and Agalawatta, Bandaragama, Mathugama, Panadura, Horana, Beruwala, and Kalutara were identified as high-risk areas in the Kalutara District. The Manning Market and the Peliyagoda Fish Market are also to be given priority in the vaccination drive.


Meanwhile, the Ministry of Health said that it expects to complete the Covid-19 vaccination drive for the majority of the population in the Western Province by the Sinhala and Tamil New Year.


Sri Lanka is expecting to receive its GAVI COVAX Facility vaccines for 20% of the country’s population by the end of February. It was reported yesterday that a consignment of 500,000 Oxford-AstraZeneca Covidshield vaccines from the Serum Institute of India, ordered by the State Pharmaceutical Corporation, would be delivered by 25 February.

January 5, 2021 byMihi Perera No Comments
Police Spokesman DIG Ajith Rohana today stated that Rapid Antigen Testing will be conducted on the individuals arrested for the offense of not wearing face masks.

October 4, 2020 bythemorningeditor1 liberty No Comments
The Minister of Labour and the regional plantations companies (RPCs) appear to be at loggerheads over the implementation of the Rs. 1,000 per day wage hike for estate workers, with the Minister insinu