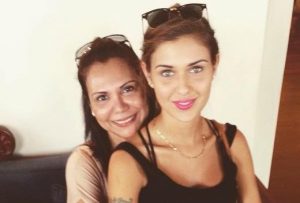 The sister of Swedish national Yvonne Johnson, who was brutally murdered at the Royal Park Condominium in 2005, in a public statement on Facebook condemned President Maithripala Sirisena’s decision to consider granting a presidential pardon to her sister’s murderer, Shramantha Anthony Jayamaha.

President Maithripala Sirisena addressing an event held last Saturday said he was considering a presidential pardon for convicted murderer Shramantha Jayamaha on grounds that he was taken into custody when he was 19 years old and that he is now a reformed individual. He added Jayamaha had also completed a PhD in prison.

As Yvonne’s sister it breaks my heart to have to respond to the recent news about the President considering a pardon for my sister’s murderer, but I feel it is my duty to do so.

Many of you will know my sister through news reports as a 19-year-old Swedish girl (please note, we are also half Sri Lankan through our mother and grew up in Colombo) who was found brutally murdered at the Royal Park Condominium in 2005. For me and many others who knew her, she was full of life and had many dreams she wanted to fulfill. She had a close-knit and loyal group of friends, whom she loved and cared about immensely. She was a fashion student and eager to continue her studies in London, where we met days before her death. My sister and I were very close and since we were little she always had my back. This bond would ultimately be linked to her death, something I’ve had to carry with me since and will never come to terms with.

This moment right now is surreal. Did I know that my sister’s murderer being released was something my family and I could have to face someday? Of course we did, as his family has used power and money in their attempts to get him released, but not for the reasons recently outlined by the President. I wonder how anyone would feel if it was their daughter, sister or family this happened to. The murderer not only destroyed my family but his family too. This was not a one-off. He was known to be violent all his life, at school where he was expelled and at social events when he couldn’t control his jealousy. I experienced this during my brief relationship with him and I recall feeling trapped, scared and helpless. My sister’s murder was not someone losing their patience over a disagreement, it was premeditated. He waited for her outside our apartment though he pretended to me he was going home. During this time he arranged with a friend (who would later change his testimony in court to provide the murderer with an alibi) to be collected at a later time. When my sister arrived home he chased her from the 23rd floor, pushed her, strangled her and then smashed her skull on the cement floor. She was found on the 19th floor. He had the chance to walk away and to stop but he didn’t. I still recall sitting in court and hearing how her skull was fractured into 64 pieces. My father had to identify his daughter in the morgue with no face. Are those the actions of someone who deserves to be pardoned? This was no accident nor a small incident as some have claimed. The murderer did not stop after strangling my sister to her death, he continued his attack by smashing her face numerous times on the floor. He then tried to remove evidence by washing my sister’s blood off himself in the swimming pool, went in to hiding and even purchased a flight ticket in an attempt to flee his crime.

Today we live without a daughter and sister. She could have been a mother too. Yet all this is overlooked because he is reportedly reformed through acquiring a PhD in prison. Why hasn’t this apparent reformed man ever apologised to my family and I? For nearly 15 years we have fought for justice the formal and right way, and his family has consistently tried to bribe their way out of this. This has got to stop. For those who have taken their money, I want you to know that you’ve accepted blood money and how you’ve managed to live with yourself is beyond my understanding. For those saying my sister was intoxicated, do note that she did not consume alcohol as she was driving that night, it is noted in the official autopsy. That is the type of responsible person she was.

My family and I will never overcome the pain and distress that my sister’s murderer has caused. He showed and continues to show absolutely no remorse for what he has done. To say my sister’s brutal killing has turned our world upside down is an understatement. Everyone who attended her funeral saw a coffin being descended into the ground but along with it, I too went. So did my mother and father. We’ve worked hard to rebuild our lives and here we are, going into 15 years, still fighting for justice. Unfortunately, we now have to prepare ourselves for the worst possible outcome, the pardon of my sister’s murderer, but we also pray that hope and justice will prevail. We will keep focusing on our future, keeping her spirit alive with us always and let a higher power continue this fight.

June 21, 2020 byTSM Web Desk No Comments
The number of PCR tests that are being conducted per day varies due to different circumstances, said Ministry of Health Consultant Community Physician and Chief Epidemiologist Dr. Sudath Samaraweera.