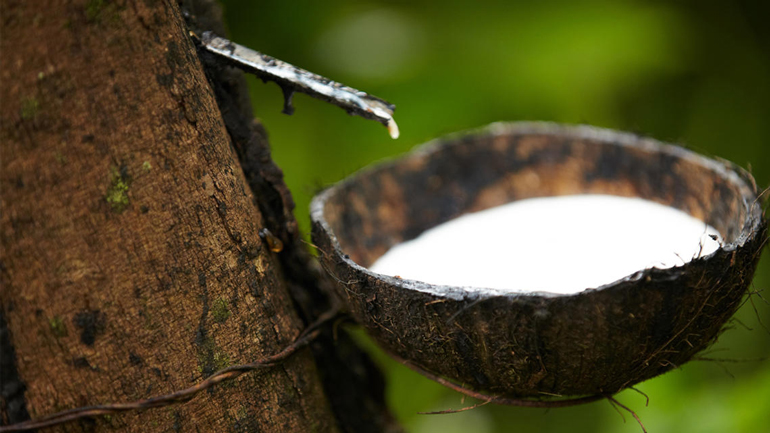 The Ministry of Plantation Industries began developing 10 selected rubber projects at a cost of over Rs. 12 billion, out of the 25 overall projects under the nine-year Rubber Industry Master Plan to improve Sri Lanka’s rubber industry.

Speaking to The Sunday Morning Business, Ministry Secretary J.A. Ranjith told that feasibility studies are being conducted at the moment for the implementation of these projects. A Memorandum of Understanding (MoU) to implement the Rubber Industry Master Plan 2017-2026 was signed between the Ministry of Plantation Industries and the Sri Lanka Society of Rubber Industry on 12 September. The plan aims to make Sri Lanka’s existing $ 1 billion rubber industry a $ 3 billion industry before 2026.

The nine-year plan itself has experienced a two-year delay from its initially planned year of 2017. Ranjith attributed the delay to the establishment of the Rubber Secretariat.

“We couldn’t implement the plan as scheduled in 2017 because we were establishing a rubber secretariat and we had some staffing issues as well. Now, everything is sorted and that is why we signed the MoU.”

He noted that they have already allocated funds for seven projects while they are working on allocating funds for the rest of the three projects.

However, he noted that despite the two-year delay from the drafting of the Master Plan, the costs of the projects would remain the same as planned initially.

Ranatunga further added that upon the completion of the feasibility studies, they will look into ways to develop the projects, even though the projects are state-funded at the moment. “We might look for foreign assistance after the feasibility study. Our main plan is to implement these projects in public-private partnership. The Government wants the private sector’s contribution.”

He further added that despite the two-year delay, if all 25 projects are implemented according to exact instruction and forecasts of the Master Plan, the Government will be able to reach the desired levels in 2026 as initially planned. “But for this, we should ensure that we follow what’s in the plan. Otherwise, it might be delayed.”

Following the implementation of the 10 selected projects, remaining 15 projects will be implemented as soon as possible, according to the Ministry.

The 10 selected projects are establishments of new smallholdings in non-traditional regions suitable for the cultivation of rubber, expansion of the extent of rubber estates, adoption of new technologies and good management practices in rubber production, strategic promotion of Sri Lankan rubber products, enhancement of efficient resource use and productivity in the rubber manufacturing industry, establishment of a Finite Element Analysis Simulation Centre, ensuring effective use of rubber industry data for decision making, capacity enhancement of the Rubber Product Development Centre, establishment of a Project Facilitation Unit, and strengthening of the Rubber Cluster Young Network.

The expansion of the extent of rubber estates managed by regional plantation companies (RPCs) would be done at a cost of Rs. 1.5 billion. Under this project, 3,000 hectares of suitable underutilised lands available in the estate sector would be converted into productive rubber plantations.

A cost of Rs. 2 billion would be spent for the adoption of new technologies and good management practices in rubber production. This particular project will increase rubber yields by 50% and output by 20%, while reducing cost of production by 20% and increasing labour productivity by 30%.

The strategic promotion of Sri Lankan rubber products will be undertaken at a cost of Rs. 1.3 billion. The promotional activities would be undertaken with the support of the private sector and the Export Development Board (EDB).

In addition to these projects, a Finite Element Analysis Simulation Centre (FEASC) will be established at a cost of Rs. 100 million. The FEASC is an advanced laboratory manned by highly competent technologists and equipped with advanced computers installed with specialised software. The FEASC will help manufacturers develop new products faster with better performance at a lesser cost.

Ensuring the effective use of rubber industry data for decision making would be done at a cost of Rs. 125 million. This project will improve the quality and timely availability of rubber-related information. A website will be created to facilitate interactive communications among stakeholders.

The capacity enhancement of the Rubber Product Development Centre (RPDC) would be done at a cost of Rs. 255 million. The RPDC will be subjected to a complete overhaul and upgrading, with a completely changed scope, structures, and systems.

For the establishment of a Project Facilitation Unit (PFU), Rs. 140 million will be spent. The functions of the PFU includes the prioritising of conceptualised rubber projects, facilitation of feasibility studies, development of detailed designs, sourcing of funds (either in the form of grants or loans), and the development of suitable private-public partnerships to manage and monitor rubber projects.

The strengthening of the Rubber Cluster Young Network (RCYN) would be done at a cost of Rs. 5 million. Under this project, the RCYN membership will be expanded to represent all segments of the industry, and a series of value-adding projects for them to engage in would be developed.