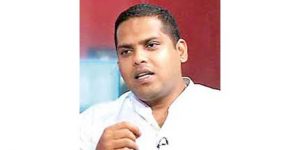 The Rugby Union is to investigate an incident where the coach of a popular boys’ school in Colombo slapped a student during a rugby match.

The video of the incident went viral last week on social media together with another incident which showed Minister of Sports Harin Fernando tapping some boys ahead of a game.

Speaking to The Sunday Morning, the Sports Minister said that the incident involving him was over a year old.

He stated that he had not abused the boys and only gave them an affectionate tap.

However, the video involving the coach of a leading school showed the coach slapping a boy a number of times.

Fernando said that the Coach of the St. Peter’s College rugby team was seen slapping a St. Peter’s rugby player after a practice match with D.S. Senanayake College at Havelocks.

The Minister said he was informed that the school had since reprimanded the coach for his actions.

He also said that the Rugby Union was investigating the matter and would be submitting a report in due course.

GMOA islandwide strike from next week

August 16, 2019 byTSM Web Desk No Comments
The Government Medical Officers' Association (GMOA) will launch an islandwide strike next week, as its efforts to uplift the health sector in the past year have proved futile.

January 10, 2021 byRusiru Keppetipola No Comments
In addition to stipulating the minimum age of marriage, the Muslim Marriage and Divorce Act (MMDA) is being reformed to include female Quazis, who are judges under the said law, and to seek..