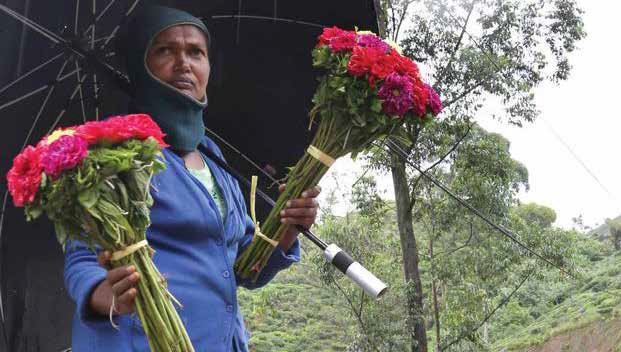 The season, starting from the first week of April which trickles through to the first week of June owing to the Sinhala and Tamil New Year, Vesak commemorations, and religious and seasonal activities, is considered the busiest months for many in the cottage industries of the country.

Their capability to earn during these two months could allow them to sort their finances for the rest of the year, thereby enabling them to pay off any loans they took pawning gold or via microfinance schemes.

However, these small enterprises were overlooked by the Government when they announced relief packages to assist in the current climate. For those engaged in the cottage industries, going to an established financial institution to obtain a loan would be considered a longshot as they do not have the necessary paperwork nor do they fall under the low-income categories, which then also disqualifies them to apply for schemes such as Samurdhi.

Over the past weeks, many small enterprises were expecting to directly and indirectly benefit from tourism – both local and foreign – activities surrounding religious and cultural days, and also seasonal activities such as the fiestas that take place in Nuwara Eliya during the month of April; these are but a few instances when these small businesses earn large portions of their annual income.

The cultivators of flowers to floral business; the flower picker to the flower vendor who supplies flowers as offerings at temples; the clay miner to the potter; and the harvester of palm leaves to the weaver of palm leaf hats, have felt the chain reaction of losing business over the past six weeks.

Along with reports of the many affected by the virus, we also came across reports from across the country on how the pandemic is crippling the personal finances of many families, gradually disabling the country’s economy and lowering the gross domestic product (GDP).

Suffering across the island

Fifty shops in the vicinity of Hakgala Botanical Gardens have lost business due to curfew and travel restrictions. Shop owners said that most of their inventory has now expired and perished.

“We buy this inventory on loans. We have incurred heavy losses, but will have to pay the loans we took despite having no income over the past two months,” one of the vendors lamented.

The pottery industry in Uva Paranagama and Horana brings in a considerable amount of earnings during April and May as many purchase new pots to prepare milk rice for Avurudu and a lot of clay lamps get sold during Vesak in May. However, this year, these industries could not make any profits due to the travel restrictions and the difficulty in supplying any of the products to other cities.

“We have pawned all our gold jewellery and taken loans to purchase the necessary raw materials to make these lamps, pots, and vases. But with the pandemic, we have not been able to sell any of these things,” a potter from Uva Paranagama said.

Echoing similar sentiments, a potter from Horana added: “These are the peak months for our business and whatever earnings during this period allow us to pay off the loans and then continue with our life for the rest of the year. This year, we surely will struggle as we were not able to sell a single pot or lamp.”

Flower pickers and vendors in Anuradhapura and Mahiyanganaya said that it is during April-June that they are able to earn the most. But due to the curfew, they have not been able to earn a cent this year.

“We do not have any field to cultivate in this area and can only pick flowers and sell to the flower shops that are in the vicinity of the Mahiyangana Raja Maha Vihara. We sell each flower at about Rs. 4 or Rs. 5, but the flower shops sell flowers at Rs. 25 each. Even the little amount that we earn has now stopped coming in as there are no people visiting the temple,” a flower picker from Mahiyanganaya said.

In Ethumalpitiya, Polonnaruwa, 150 families are engaged in producing palm leaf hats which are favoured among locals as well as foreigners. There had been a high demand for these hats across the island prior to the Covid-19 pandemic. However, travel restrictions have now hindered this business.

The Industrial Development Board (IDB) will meet with officials of the Ministry of Industries and Supply Chain Management as well as other state institutions next week to discuss the challenges the local industries are facing at present.

“The Covid-19 pandemic has greatly affected many traditional industries. We have instructed our regional offices to gather the details of all the local industries that have been affected. While some of the industries will need financial aid to get back on their feet, we will also need to look at assisting them with selling their products,” IDB Director General P.L.U. Rathnamalala explained.

He stated that a blanket decision will have to be taken for all the industries at this point. However, if the IDB is to provide financial concessions to the industries, there would be an issue of funds.

In his stead, we contacted former State Minister Dayasiri Jayasekara, who stated that since he has been dismissed from his ministerial post after Parliament was dissolved, he is not part of the decision-making process anymore.

Government Spokesperson Keheliya Rambukwella, speaking to The Sunday Morning, said that the present situation is totally new to the world. While the Government initially expected that the first circular issued to announce relief and concession for the people would suffice, it had now in total issued five such circulars where different segments of the public and industries had to be included to ease their financial burdens.

Rs. 50 million was set aside not to give loans, but to pay banks the interest income lost when issuing loans at the rate of 4%, he shared.

“As we move on, we see that there are more segments of the local industries and enterprises that have not been covered by the relief and concessions that have been announced. Once these issues have been reported, the Government will look into those areas and make certain adjustments to the welfare sector and accommodate them,” Rambukwella explained.

Providing relief and concessions to the entire business community needs to be comprehensively looked into and should be broken down to very specific areas as well, Rambukwella claimed. He added that this is an ongoing situation and damages cannot be totally assessed before providing assistance and relief.

April 18, 2021 byNews Admin No Comments
Including this recent cabinet sub-committee, several other committees appointed to solve the power shortage in the past decade, and also energy experts, have advocated for successive governments, incl

Issue of deforestation: Who is at fault?

March 21, 2021 byNews Admin No Comments
As the world seeks to preserve wildlife, protect forest cover, and reduce global warming, forests in many regions in Sri Lanka that have remained largely untouched over the years are now fast disappea