Ruwan fears MS will take over other state media 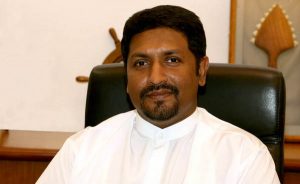 State Minister of Defence & Mass Media Ruwan Wijewardene fears President Maithripala Sirisena will bring all other state media under his purview ahead of the presidential elections.

Wijewardene told The Sunday Morning that the President’s decision to bring Rupavahini under his wing is clearly a move to gain advantage at the upcoming presidential elections.

The President had yesterday (Monday) issued a special gazette notice bringing Rupavahini under the Ministry of Defence.

“With elections coming around the President wanted to take over the Media institution. I hear that the Chairman of Rupavahini will now be replaced. This clearly proves his intentions.” Wijewardana pointed out.

“He has taken the Sri Lanka Rupavahini Corporation (SLRC) under his wings, he will most probably find another reason to take the rest of state media institutions.” Wijewardana stressed.

He further pointed out that there was a question as to which Ministry would now have the power to issue media licences.

He said the Rupavahini Act gave necessary powers to the Media Ministry to issue licences to media organisations.

“If such power is given to the Defence Ministry how will this affect Media freedom and is this ethical?”, Wijewardana questioned.

“I wasn’t consulted when the decision was taken. I only got to know through news reports” the Minister said.

He also said all requests to turnaround the corporation had proved futile.

“I have been trying to change the Rupavahini management from the time I was appointed. I have briefed the President about the corruption and inefficiency levels at the corporation. The unions were up in arm warning of a collapse. I have put forward names of prospective Chairmen but they were rejected by the President.” Wijewardana said.

First sextuplets born in the Island

October 21, 2021 byRuwani Fonseka No Comments
Sextuplets were born in a private hospital in Colombo today to a 31 year old mother, for the first time in Sri Lanka.

The babies born are 03 males and 03 females.

The mother and babies are said to b