RW tenders his resignation to Prez 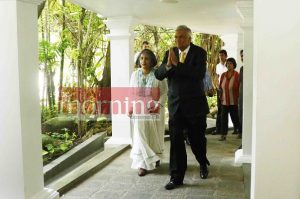 Prime Minister Ranil Wickremesinghe tendered his resignation to President Gotabaya Rajapakse a short while ago.

Wickremesinghe made the decision to step down in order to facilitate the appointment of care taker government under President Rajapakse.

Opposition leader Mahinda Rajapaksa will be sworn in today as Prime Minister of Sri Lanka.

May 13, 2021 byNews Admin No Comments
The Government has stated that it would purchase paddy for a higher price if the ban on the import of chemical fertilisers affects the yield of farmers.

July 27, 2022 byNews Admin No Comments
Forensic medicine academics propose amending Code of Criminal Procedure for an inquest into deaths of those with life insurance policies