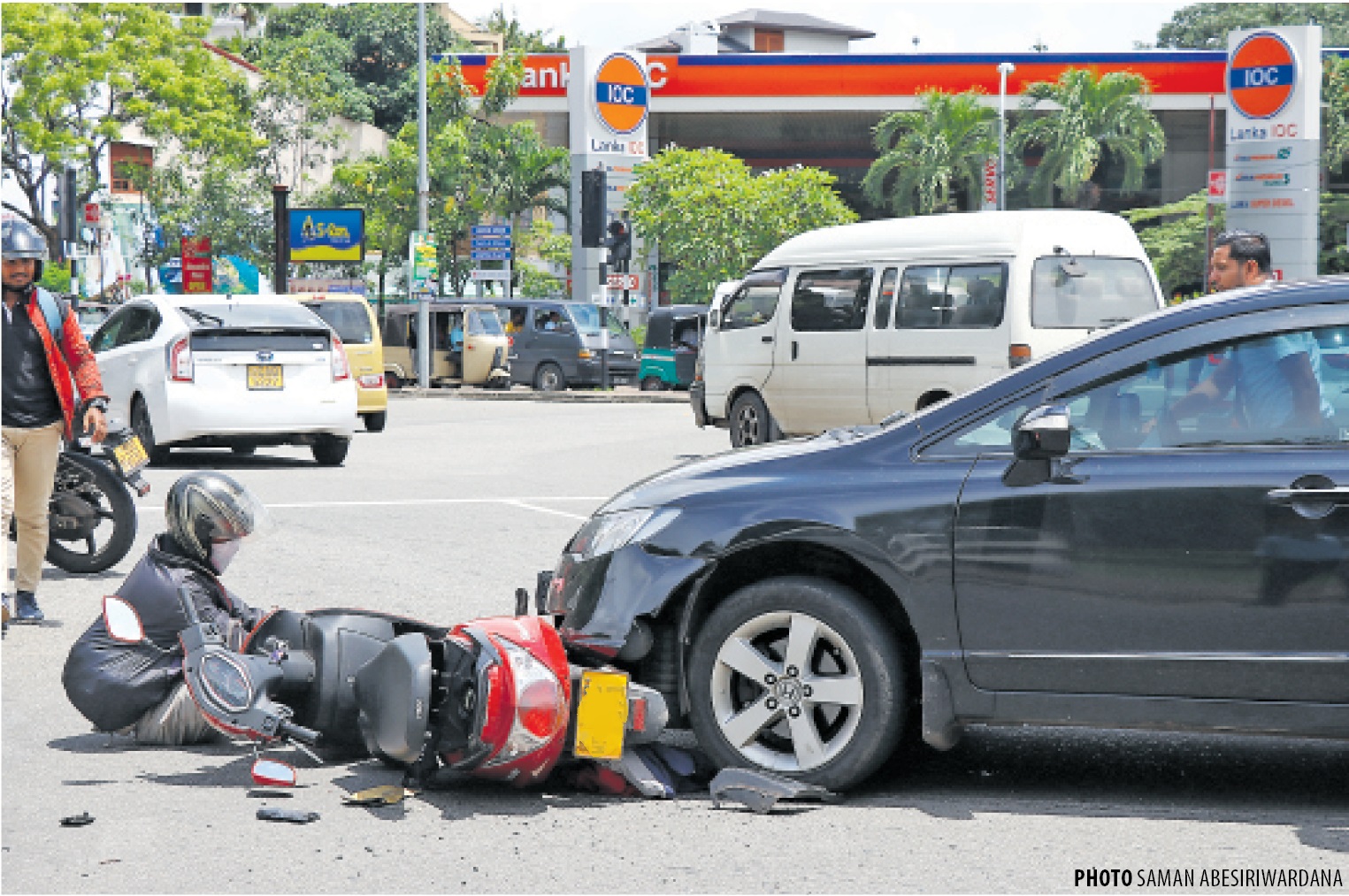 Globally, about 1.25 million people die each year as a result of road traffic accidents. In Sri Lanka, about seven to eight people die each day, resulting in approximately 3,000 deaths per year, as per Sri Lanka Police statistics.

Among motorists, the most susceptible group prone to road accidents is motorcyclists and three-wheeler drivers. Many of those affected by road accidents are aged between 15-45 years. Therefore, we can say that these road accidents are indirectly affecting the efficiency and involvement of the workforce of the country and thereby its development.

As of this year, Sri Lanka has about eight million registered motor vehicles, yet the road network in place has not been developed to cater to this increasing number. Traffic congestion too has increased over the years and is a contributing factor in the increase of road traffic crashes.

According to Sri Lanka Medical Association (SLMA) Expert Committee on Prevention of Road Traffic Crashes Co-Chair Prof. Samath Dharmaratne, the Government of Sri Lanka each year incurs a cost of over Rs. 5 billion to treat patients who are injured due to road accidents.

“When you get to the main road, no one can ensure that you will get home safe as the roads are very unsafe. Over the past seven years, about 1,000 children have died in Sri Lanka due to road traffic crashes. The main cause of road accidents seems to be the lack of discipline of motorists and pedestrians, and their inability to follow road rules,” Prof. Dharmaratne said.

He added that road traffic crashes are preventable, but yet continue to be a health challenge to the population, with millions of rupees being spent on victims and treatment of the injured. The primary measure would be to prevent road traffic accidents from taking place altogether, while treatment from healthcare professionals, doctors, and nurses are the secondary measure.

“The rest of the injuries vary. Most of these injuries occur due to negligence and not using safety precautions,” National Hospital of Sri Lanka Neuro Trauma Unit consultant neurosurgeon Dr. Sanjeewa Garusinghe explained.

Dr. Garusinghe stated that most often, the victims were travelling on motorcycles without helmets or in overcrowded three-wheelers and sustained fatal injuries. Victims sustain primary damage and secondary damage due to road traffic accidents, he added.

“Primary damage takes place at the time of the accident, which is directly proportionate to your speed while travelling. If a cyclist got into an accident, there would be less damage, but if you meet with an accident while travelling in a heavy vehicle at high speed, then the injuries will be severe.”

“After the first impact, conditions in the brain change – it swells – and brain hematoma, metabolic problem, and fits occur, which can be treated.”

Dr. Garusinghe noted that prevention of road accidents is crucial and urged motorists to obey speed limits and road rules, use seatbelts and helmets, and refrain from driving after consuming alcohol and using mobile phones while driving.

“Most importantly, when a person meets with an accident, the transferring of the victims should be done by trained professionals. It is advisable to call an ambulance, so that the patients can be moved to the nearest hospital in a safe way in order to prevent the victim from sustaining any further damage to the spine or head. A paramedic will always put a collar and use a spine board and administer oxygen to the victim while transporting them to the nearest hospital,” Dr. Garusinghe stated.

All the victims who are admitted following traumatic incidents are treated in accordance with Advanced Trauma Life Support (ATLS) protocol, which the College of Surgeons practise to prevent further damage to the victims.

Most of the patients admitted to the hospital following road accidents will have to undergo rehabilitation treatment. While these facilities are not that advanced in Sri Lanka, Dr. Garusinghe stated that most of the time, a physiotherapist guides a patient into rehabilitation.

He also noted that family counselling too needs to be considered and more importantly, hospitals should follow the organ transplant programme, and if the trauma victim succumbs to their injuries and becomes brain dead, there is a possibility of taking their organs for transplants. The organ removal will be done with the permission of the victims’ family members, Dr. Garusinghe noted.

Only a fraction reported

“The introduction of insurance policies for motorists to promptly claim insurance has actually reduced the amount of traffic accidents reported to the Police. From what I have gathered from the insurance companies, there are at least 500,000 road accidents that happen in Sri Lanka per year. Yet, the number reported to the Police is much less. With the data available at the Police, we can account for only about 30,000 accidents over the past 10 years,” Sri Lanka Police DIG of Legal, Discipline, and Conduct Ajith Rohana informed The Sunday Morning.

DIG Rohana stated that in addition to conducting awareness programmes, the causes for these road accidents needs to be identified. He also stated that when a fatal accident occurs, an investigation needs to be conducted, a postmortem needs to be performed, and a legal process needs to be followed, which take about three to four years. To top that off, the victims will have to file separate cases to claim damages and compensation.

“While we cannot place a value on a person’s life, I need to point out that the legal proceedings alone cost about Rs. 1 million and taxpayers’ money is spent. Considering that about 30,000 lives were lost due to road accidents over the past 10 years, the Government would have incurred a cost close to Rs. 30 billion on legal proceedings and police investigations alone due to road traffic accidents,” DIG Rohana elaborated.

Speaking on the road accident statistics, he also pointed out that the highest number of fatalities was reported for motorcycle riders in 2017 and 2018, which makes up about one-third of the victims. The next group that was most vulnerable was pedestrians, and in both years, there were over 900 pedestrian deaths.

He also noted that the country’s road network needed to be upgraded and strict regulations needed to be in place in order to reduce road accidents.

“The Police alone cannot find solutions to the traffic problems in the country. Therefore, we need all the relevant stakeholders to contribute towards finding a solution and reducing road traffic accidents. Moreover, public transport facilities need to be improved and the amount of vehicles entering the city needs to be limited during the day,” DIG Rohana concluded.

September 27, 2021 byAazam Ameen No Comments
Local doctors suggest informed consent and mandatorily having a chaperone of the patient’s sex present during interaction

July 25, 2021 byNews Admin No Comments
The existing system of the mandatory renewal of all driving licenses should be expanded to include components of a system to mandatorily notify of health conditions that could affect driving, and the