By Sunil Thenabadu in Brisbane, Australia 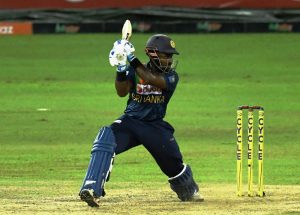 Sri Lanka’s highest run-scorer in the ODIs was Charith Asalanka. Here he bats in the second T20I on 12 September at R. Premadasa, Colombo. Photos Pradeep Dambarage

Most Runs in the ODIs:

Most wickets in the ODIs:

Most wickets at the T20Is:

South Africa team with the T20I series trophy on 14 September at R. Premadasa

It was apparently not a flash in the pan for our white-ball cricket team when they broke the losing-streak ‘hoodoo’ against the formidable India recently. Thereafter Sri Lanka beat a more formidable South African team to gain a series win, after an eight-year drought, in a bilateral One-Day International (ODI) series.

Until the beginning of that series, the tally stood at about 20 losses to only five wins. With that series win, Sri Lanka added 10 more International Cricket Council (ICC) Super League World Cup 2023 pathway points as well. 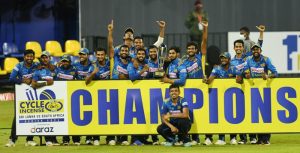 After the fruitful conclusion of the Sri Lanka Cricket (SLC) Invitational Twenty 20 (T20) tournament, the focus on fitness, performances of the coaching staff and the selectors, and the newly-knit Sri Lanka outfit corroborated an effective series win in the ODIs against the fifth-ranked Proteas, a triumph after a drought of eight long years.

For the T20 International (T20I) series, the selectors, after much deliberation, brought in experienced Dinesh Chandimal, all-rounder Kamindu Mendis, and ‘anam-manam’ mystery spinner, the off-spin-googly-and-carrom-ball exponent Maheesh Theekshana, after the latter had not been recognised much, having played only a few games for Colts CC and the Lanka Premier League (LPL). Theekshana debuted as the only Sri Lankan cricketer born in the 21st Century to play for Sri Lanka, too. 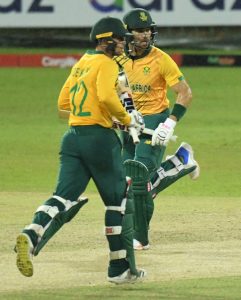 Quinto de Kock (on left) and Reeza Hendricks (right) shared impressive opening partnerships of 73, 62, and an unbeaten 121 in the three-match T20I series. Here is the pair in the second T20I on 12 September in Colombo

On 14 September, South Africa completed a 3-0 T20I drubbing in our own backyard. In the first T20I, there was some endurance by us losing by 28 runs. The second and third T20Is, the Proteas triumphed by huge margins romping home victorious by nine and ten wickets respectively with over five overs to spare.

In all three T20Is, openers Quinton de Kock and Reeza Hendricks laid the foundation scoring freely against our spinners. De Kock was unanimously named the Player of the Series as well. For the hosts only Kusal Janith Perera, who came out after an illness, batted with confidence.

At the post-match media conferences after the third and final T20I, Sri Lanka Skipper Dasun Shanaka had to answer an offensive onslaught of questions posed by media personnel. Shanaka added the Proteas were more skilled and bowled in good areas.

He attributed the ‘whitewash’ was mainly to the wickets that were prepared to favour our spinners which backfired; those pitches were better exploited by the Proteas who had a better spin combination in ‘Chinaman’ exponent Tabraiz Shamsi, Keshav Maharaj, and Aiden Markaram.

Shamsi is currently world No. 1 T20I bowler. The trio strangled our batsmen not allowing them to settle down by bamboozling them. Of course, Shanaka admitted that many of our batsmen were dismissed after making rash strokes with soft dismissals. He also confessed that in the SLC domestic T20 tournament, almost all batsmen performed as the wickets prepared at the Pallekele International Stadium suited them with the ball coming on to the bat.

He claimed that the batsmen should adopt how to bat in the ‘Powerplay’ overs when the strike should be rotated without losing wickets. Then they needed to plan the run rate in the next phase and thereafter in the death overs. This had been the manner of batting in the previous T20I tournaments. All are aware of our batting strengths and we could have done that.

Shanaka also attributed T20I failure to the rain and dew factor which hampered our spinners in gripping the ball. He stressed that Bangladesh, in contrast, prepared wickets to suit their bowlers which facilitated the Tigers in whitewashing both New Zealand and Australia at home.

Shanaka had to answer a question which raised the fact that there were four sets of opening pairs in the Lankan setup in the T20Is. When a right-handed batsman got out early, Dhananjaya de Silva was sent in so as to have left and right-hand combination but he unfortunately failed.

Shanaka added that de Silva is talented and should be in the team. He also added that, as a permanent strategy for the forthcoming T20 fixtures against Oman, the same team would play, fixing the batting woes of the side in their run-up to the T20 World Cup next month.

When asked whether they would make changes in the final squad, Sri Lanka Captain answered in the negative.

He said Dushmantha Chameera and Wanindu Hasaranga de Silva are to play in the Indian Premier League (IPL) phase two which would be an enhanced experience prior to their World Cup campaign. When questioned about the usefulness of their Batting Coach Grant Flower, he confessed that Flower had done nothing erroneous. 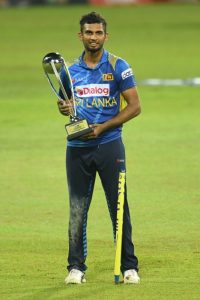 At a previous post-match media briefing, Shanaka had to answer a bombardment of interrogations posed by the media. He attributed success to the environment that he had created where all players, both junior and senior, could express their opinion, a situation which had not much existed hitherto, reportedly. This made all players to be freer and more united.

The selection of Theekshana was his proposal which the selectors had backed. He defended the batsmen not being able to face spin, saying it was mainly due to the surface. He said after the second ODI that his batsmen performed against spin in the first match while it was swing, rain interruption, and the D/L Method that caused Sri Lanka’s batting debacle in that game.

However, he also admitted that the dot-ball count, particularly in the T20Is, was on the high side on which some fine-tuning needs to be done.

Shanaka also added that any talented cricketer should be identified quoting the example of Charith Asalanka who failed in England but came back strong after he was trusted by the selectors as possessing flair in abundance, which would augur well for Sri Lanka in the future.

Despite the T20I whitewash by the formidable Proteas, all fans and administrators should be happy as our cricket, especially the white-ball version, is on a winning stretch, splitting the hoodoo of a losing streak

It is time to nudge on in the same vein, like we performed against the formidable Indians, in the forthcoming T20 World Cup proper, scheduled to begin on 24 October.

Of course, Sri Lanka will have to perform well in the preliminary-stage fixtures with Namibia, Netherlands, and Ireland where only two will play in the big league in the World Cup proper.

All Sri Lankan fans, no doubt, would be optimistic about the team performing really well and give their utmost in this major ICC event to bring credit to their mother country.

Sunil Thenabadu in Brisbane can be reached on e-mail sthenabadu@hotmail.com

August 13, 2021 byRevatha No Comments
Great Britain may strip of a Tokyo 2020 silver medal

April 28, 2022 byNews Admin No Comments
Sri Lanka Cricket (SLC), as part of their restructuring programme of the High Performance Centre, made appointments of coaching units to Sri Lanka “A”, Emerging, and Under-19 teams yesterday (28). Ear