Opposition Leader Sajith Premadasa has called on the government to ‘stop burdening the public’ and to immediately reverse the fuel price hike.

In a statement the Opposition Leader said the disgraceful act of increasing fuel prices at this time has led to much controversy in the country and the government has become a joke in the face of the people as it is unaware as to who decided to increase the prices of fuel.

Sajith Premadasa further went on to note that internal struggles of the government are burdening the people. 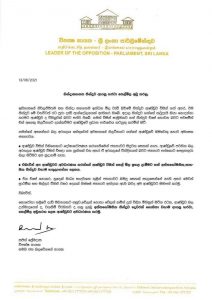 PCR testing to increase: 10,000 if all machines used

April 29, 2020 byTSM Web Desk No Comments
Prime Minister Mahinda Rajapaksa recently instructed that the number of tests carried out to detect Covid-19 should be increased to at least 2,000 tests per day.

September 6, 2021 byNews Admin No Comments
Top officials at the Wildlife Conservation Department (DWC), speaking to The Morning yesterday (6), claimed that while the Dayaka Sabawa (council of laity) at the Sithulpawwa Rajamaha Viharaya located